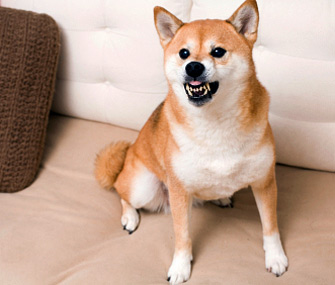 Dogs can become aggressive and bark, growl, lunge at, and even attack other pets and people for all kinds of reasons — dominance, fear, defense of territory, pain, frustration, overly enthusiastic play, and more. The safest and most effective way to treat aggression is behavior modification under the guidance of a qualified professional. Drugs may sometimes help, but early socialization is the very best preventive.

Aggression is among the most common behavior issues seen in dogs. It typically includes the kinds of behaviors we associate with threat or attack, such as barking, growling, and biting. In most cases aggression is perfectly appropriate, as when dogs bark to warn other dogs of their territorial limits or growl in response to threatening sounds.

However, some dogs will display increasingly intense versions of this normal behavior. This typically progressive manifestation of aggression in dogs can be dangerous to humans, other dogs, and other animals that may share the same household. In these cases, the aggression may be treated as a disease and, as such, is often cited as a common cause of death in dogs since relinquishment to shelters (and subsequent euthanasia) is a common sequela of the aberrant forms of this behavior.

Severe forms of canine aggression may have a hereditary component, as with the disease colloquially referred to as “rage” that afflicts certain lines of dogs. This form of aggression is considered deeply pathological and rare and, as such, will not be treated here.

It should also be noted that aggression can be appropriate, as well. Though dogs have been domesticated by people for a long time, it is important to remember that they are still animals with a very strong instinct for “fight or flight” when danger is present. When presented with a threat, many dogs will try to escape; however, some dogs will choose to fight against the danger and may bite in response to the threat, which is why it’s important to follow certain safety guidelines when working with dogs to avoid injury.

Dogs don’t always follow the above sequence, and they often engage in several of the behaviors simultaneously. Owners often don’t recognize the warning signs before dogs bite, so they think that their dogs have suddenly become aggressive for no apparent reason. However, dogs rarely bite without warning.
Aggression can be a complicated condition to evaluate. Some dogs may exhibit a single form of aggression, while others may exhibit several types of aggression at the same time. Understanding the different types of aggression can help get to the root of the problem.

A dog of any breed can become dangerously aggressive. Though genetic predispositions are known to exist within lines and perhaps even among entire breeds, most versions of canine aggression are considered preventable and treatable. (This issue is highly controversial as it often comprises the basis for breed-specific legislation.)

In any case, treating canine aggression is usually complex and can be dangerous, so a treatment plan should be designed and supervised by a behavior specialist. Look for a certified applied animal behaviorist (CAAB or ACAAB), a veterinary behaviorist (DACVB), or a certified professional dog trainer (CPDT) in your area. If you choose a CPDT, be sure that he or she has training and experience in treating canine aggression.

Helping your dog avoid situations that cause him or her to become aggressive can reduce the risk of your dog biting someone. Physical punishment, including the use of prong collars and electric shock collars, can worsen a dog’s aggression. Therefore, punishment of aggression is not recommended.

In general, the following issues will determine the severity of the problem and need for lengthier professional treatment timeframes:

As to preventing injury: Common steps to avoid injury include using proper restraint. This can vary depending on the dog, but at minimum, a collar or harness and leash in good condition should be used when handling a dog. Consult with your veterinarian about appropriate collars for training. It is vital to have the dog in a secure environment (e.g., a room with a closed door or a fenced yard) and ensure that the dog’s collar is secure, or the dog may be able to escape the collar and run away. In some cases, additional restraint such as a muzzle may be necessary.

Introducing dogs slowly to new situations or new dogs can be helpful to avoid agitating them. However, it is not always possible to avoid new situations, so it’s important to be prepared to teach the dog alternative behaviors and provide positive reinforcement to diffuse the situation.