Bored Dog? Easy Ways to Keep Him Busy and Happy 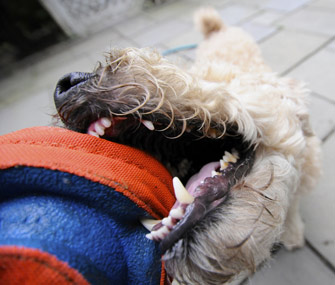 Thinkstock
Switch out toys on a regular basis so your dog doesn't get bored with them.

The other day, I overheard someone complaining about his dog’s misbehavior. When his companion suggested that the dog might be bored, the man said, “How could he be bored? He just sleeps all day.”

Wow! That’s someone who really doesn’t understand a dog’s needs. From the tiniest Chihuahua to the biggest Mastiff, our dogs thrive on physical and mental stimulation. Though some of them can tolerate being couch potatoes while we’re gone during the day, a more normal life for dogs would involve spending the majority of the day seeking out food or performing a job such as herding, helping us hunt, watching over livestock or ridding the property of rats. When dogs don’t have an occupation, they may act bored or lethargic — sleeping all the time and not showing interest in life — or they may act out, usually in ways you don’t like, such as nuisance barking or eating the sofa.

Most of us can’t provide dogs with traditional types of work, but that doesn’t mean we can’t enrich their lives in other ways. Behavioral enrichment is a fancy phrase for providing dogs with activities, games and toys that help tickle their senses (sight, smell, hearing, touch and taste) and challenge their brains. It doesn’t necessarily cost a lot of money, but it can take a little time and thought. Fortunately, there are some simple ways to help revive an apathetic dog’s interest in life and give his senses a workout.

Dogs live in a world of smells and sounds that we can’t even imagine. Sight, touch and taste are also important to their ability to explore their environment. When a dog gnaws on a chair leg or shoe, he’s breathing in the scent on it — which more than likely is yours — examining it for edibility and reveling in its texture. Give him something better to explore. That could be a chew toy with an unusual texture, such as a rope tug or one with a nubby surface, or a Kong stuffed with goodies that will take him hours to remove. Put a variety of treats inside a plastic container, add water and freeze. He’ll have to lick it good to get at them.

Switch out toys on a regular basis so he doesn’t get bored playing with the same old, same old all the time.

Going for a walk or run is the classic way to exercise a dog, but it’s easy to fall into a rut. Try a new route — or take your normal route in reverse. I bet you’ll both see things in a different way. I also like to recommend what I call “dog’s choice” walks. That means you meander at the dog’s pace, letting him sniff wherever he wants for as long as he wants. This is especially great for scenthounds such as Beagles and Bassets, but any dog can enjoy it.

It’s a good idea to schedule at least a few minutes of sniffing and marking at the beginning of every walk. Think of it as your dog checking his peemail and updating his Facebark page. That way your dog gets some pleasure from the outing, and then you can pick up the pace so you both get some exercise.

Even a dog who is less active because of age or illness will enjoy getting out and about. At least one study has shown that regular walks and interaction with people improve the cognitive abilities of older dogs. Take him for a ride in a stroller or wagon and let him get out and sniff every once in a while.