Home ›
Dr. Marty Becker ›
Hepatic Lipidosis and Your Cat: What You Need to Know

Hepatic Lipidosis and Your Cat: What You Need to Know 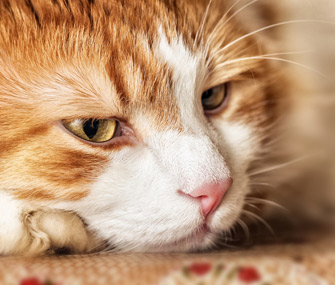 When I was a kid, I loved to put extra sugar on my cereal. To this day, I can still hear my late mother's admonitions not to use so much or I’d get what she called “sugar diabetes." As an adult, I found out that it usually takes more than just a little too much sugar to get diabetes. Likewise, your pet doesn’t get fatty liver from indulging in the less lean trimmings of your steak from time to time — in fact, it's not eating that can put him at risk.

What is fatty liver? Fatty liver, or hepatic lipidosis, is a potentially lethal liver disease that reduces that organ’s ability to function. It’s common in cats, especially if they are overweight or, in some cases, overstressed. Situations that might cause a cat to refuse to eat or be unable to eat include a change to a diet the cat doesn’t like and refuses to eat, moving to a new home, being boarded or becoming lost outdoors. Underlying diseases or medical conditions can also affect a cat's appetite and food consumption.

Take Camille. She was one of the many cats left homeless after Hurricane Katrina. When she was found, a month after the storm, the tortoiseshell cat was starving. At the veterinary hospital, she was diagnosed with hepatic lipidosis.

When the body goes into starvation mode, the metabolism changes. The body’s fat stores move into the liver and overwhelm its ability to use or redistribute the fat. You can see how that might be a problem in cats who are already overweight. But it can be a concern as well in cats of normal weight.

A cat at risk of hepatic lipidosis suffers dramatic weight loss and is often dehydrated. Lethargy, vomiting and jaundice — a yellowish appearance of the gums, eyes, ears and skin tissues — are common signs. Blood work indicates liver abnormalities. Sometimes, there is a deficiency of vitamin K, indicated by a tendency to bleed easily.

In addition to a medical history, physical exam and lab tests, an abdominal ultrasound can contribute to the diagnosis by revealing an abnormal appearance of the liver and possible evidence of underlying diseases associated with other organs including the kidneys, pancreas and gallbladder. A liver biopsy may help confirm the diagnosis.

Cats who aren’t treated quickly can go into liver failure. Treatment involves getting nutrients into them to reset their metabolism and correcting their fluid and electrolyte levels. Medications, including those to help stimulate the appetite or prevent vomiting, may be recommended. Vitamin and mineral supplements can help as well. At the same time, it's important to treat any underlying medical conditions that may be contributing to fatty liver.