Home ›
Dr. Marty Becker ›
How Do Kittens Learn to Hunt?

How Do Kittens Learn to Hunt? 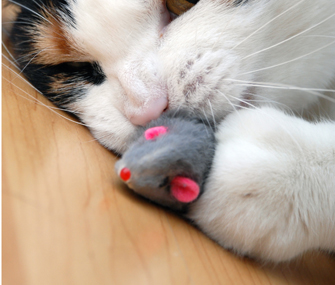 Q. Do kittens instinctively know how to hunt or must they learn from another cat?

A. A little bit of both, actually. The biologist Roger Tabor has noted that kittens who are able to observe their mothers hunt and kill become better at these skills themselves. But all healthy kittens show at least some interest in predatory behavior, even though we often refer to what they’re doing as playing with toys.

When kittens chase a string, a wadded up piece of paper or the moving dot from a laser pointer, they’re tapping into – and in some ways practicing – behaviors that have kept cats alive for countless generations. Many cats who weren't taught to hunt by their mothers will figure it out on their own, even if they're being fed plenty by loving owners.

Hunting Is Natural — and Controversial

But while the cat’s hunting behavior has long been of benefit to us by keeping down rodent populations, these days predation by cats has never been more controversial. As we ourselves expand into sensitive habitats, we take our cats with us. And when they do what comes naturally to them, they trigger a furious debate, especially when birds are their prey.

It’s worth noting, however, that biologist Tabor also points out that feral cats survive mostly by scavenging, not hunting, and that even when cats hunt, their prey is more often an unwanted mouse than a rare bird.

Any bird is one too many, though, in the eyes of some animal lovers, and the debate over free-ranging cats shows no sign of calming any time soon. And so, too, will the debate over keeping cats inside. While my wife and I have barn cats on our Idaho ranch, in different circumstances — where it was more dangerous for the cats or where they would be around endangered species — we would keep our cats indoors. It is possible to provide a good life for cats indoors, and I'd be happier if more people tried.