Identifying Pet Emergencies: When to See a Vet, Stat! 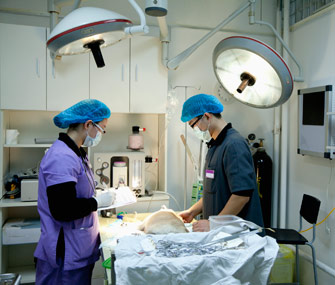 On any given night at a veterinary emergency hospital, you can find pets in congestive heart failure, animals with back injuries, puppies whohave gotten into rat poison, dogs with collapsed tracheas or animals who have been hit by cars. These are all obvious emergencies, but do you know the subtler signs that a trip to the veterinarian is warranted? Here are 12 signs you should never ignore.

Trauma: Any pet who has been hit by a car, fallen out of a window or suffered some other traumatic injury should be seen at once. Even if the animal appears to be fine, he could be suffering from internal injuries or bleeding.

Loss of consciousness or collapse: Collapsing or fainting can signal a long list of emergencies, including dehydration, heat stroke, some types of poisoning, anaphylactic shock from a bee sting, infection from a viral disease such as canine hepatitis, choking, bloat or gastric volvulus, Addison’s disease, hypoglycemia and certain heart abnormalities. If your pet collapses, get him to the veterinarian right away.

Difficulty breathing: This is the most severe and frightening form of pain. If your dog or cat is breathing rapidly, has labored breathing, is straining to breathe or gasping for air, seek veterinary help immediately. Blue or white gums, known as cyanosis, are a sign of oxygen deprivation as well. Causes of breathing difficulty include choking, some types of poisoning and congestive heart failure.

Seizures: Also known as fits or convulsions, seizures result when the brain experiences an abnormal burst of electrical activity. The pet may collapse, become rigid, lose consciousness and even stop breathing for a brief period. The legs may paddle as if the animal is running, and he may drool or lose control of his bladder or bowels. Causes of seizures include brain injuries, heat stroke, poisoning and liver failure, but sometimes they occur for unknown reasons (idiopathic seizures). Seizures that last more than five minutes or that recur rapidly are emergencies.

Bloated or enlarged belly: Some dogs are prone to gastric dilatation, in which the stomach fills with gas and fluid, or volvulus, which occurs when the gassy stomach twists or rotates. The dog may retch without bringing anything up. Both conditions are life-threatening emergencies. Don’t wait to see if it gets better.

Severe vomiting: If your pet vomits repeatedly or forcefully, the vomiting is accompanied by diarrhea, or if the vomit has blood in it, looks and smells like feces, or contains what looks like coffee grounds (actually partially digested blood), it’s an emergency.

Bloody or black, tarry diarrhea: Pets get into all kinds of things that can give them diarrhea. It’s unpleasant to have to clean up a big pile of loose, stinky, unformed stools, but it’s generally not an emergency unless the diarrhea contains blood or looks black and tarry, continues for more than a day or is accompanied by vomiting. Also seek veterinary help if a pet with diarrhea seems weak or depressed or has a fever.