Home ›
Dr. Marty Becker ›
Is My Cat Punishing Me?

Is My Cat Punishing Me? 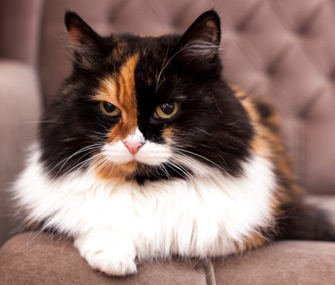 Thinkstock
You may think your cat is being spiteful when he urinates on your stuff — but the truth is that he's probably stressed.

It’s not unusual for me to hear from clients that their cats are angry or upset or just plain spiteful and are acting out — specifically by urinating on belongings or furnishings. “He's mad because I've been working late/traveling a lot/not coming home for lunch," they’ll say. Or, "I think she's jealous of my new lover/new baby/new roommate." In every case, these cat owners feel like they are being punished by their pets.

Folks, I’m here to tell you that cats aren’t spiteful. Cats are smart, for sure, but spite is a complex feeling that isn’t part of their emotional repertoire. But cats are easily stressed, and when stress enters their lives, they often respond in ways that are comforting to them but crazy-making to us.

Why Cats Mark Our Stuff

Here’s how my late colleague veterinary behaviorist Dr. Sophia Yin explained it:“One thing cats do when they’re stressed out is they urinate or they spray on things belonging to the owner, such as clothing or bedding. They choose things that smell like the owner because that’s where cats feel comfortable.”

It’s not unusual at all for cats to mark with urine when they’re faced with changes in their environment or other things that cause them stress. The most common places for them to mark in this way have some kind of social significance to them: owner possessions; laundry or closet areas, which carry strong scents of the owner; or just in prominent locations of the home, so they can make sure their message gets across.In addition, some cats will mark inside the house to make themselves feel more secure when they see strange cats outdoors. In these cases, the cats will often stand with their tail up and spray vertical surfaces, rather than crouching and urinating on horizontal surfaces.

Of course, this strategy has the unintentional effect of making you mad. And though it’s perfectly understandable to think that your cat is marking your stuff because he knows you don’t like it, in reality, your cat doesn’t know any such thing. He just knows that mingling his scent with yours makes him feel less stressed, whether that stress is caused by a new animal or person in the home or a change in your work or travel schedule.