The Rewards of Adopting a Special-Needs Pet 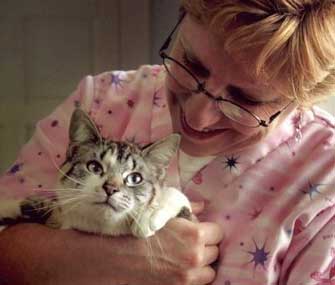 Credit: Randi Golub
Randi Golub rescued Cassidy after he was shot and left for dead.

If you follow my Facebook page, you know I am always posting stories of incredible pets and the amazing humans who love them. During the coldest Idaho winters, these "tails" of devotion warm my heart and soul.

Some of the most meaningful stories involve people who have rescued pets with special needs. These are animals with real handicaps that could have killed them — and, in some cases, almost did. I want to share a few of them with you here today. These animals and their people inspire me daily with their courage and love.

Special Pets and Their Special People

Before he was given a name and a home, Cassidy was a stray cat whose leg had been shattered by a gunshot. A good Samaritan found him and brought him to a veterinarian. Given the extent of his injuries, the fact that there was no owner and the amount of nursing carethe cat would need, the doctor felt there was no choice but to euthanize him. But veterinary technician Randi Golub of Eugene, Oregon, was touched by the plight of the thin, flea-ridden feline purring and licking her hand and asked if she could try to save him, with the intent of finding a home for him afterward. The cat’s injured leg was amputated, and Golub nursed him around the clock, seeing him through seizures and hand-feeding him. As you might guess, she fell in love with him and ended up adopting him herself.

Cassidy has never let his tripod status slow him down. He climbs to the top of his cat tree with the greatest of ease and, until retirement, made therapy visits to an assisted-living home and an Alzheimer’s unit, where his calm and loving nature won him many friends. The Oregon Veterinary Medical Association inducted him into the Oregon Animal Hall of Fame for his contributions to society, and the Oregon Humane Society gave him its Diamond Collar Hero Award.

Adopting a pet with special needs might seem like a burden to some, but the people who do it find that it comes with special rewards. Sure, there’s that warm, fuzzy feeling you get when you do a good deed, but it’s not unusual for people to find that they are the ones who benefit most from the bargain.

Katie Crosley and her then-newborn baby owe their lives to a blind, deaf, three-legged Dachshund named True. Crosley had adopted him because she knew no one else would take the dog. It was a lucky decision. True woke her up in the middle of the night, alerting her to a fire. Crosley, the baby and True all escaped out the back door before flames consumed the house.

Tripp, a three-legged Golden Retriever adopted by Ellen Franklin, went on to become a popular therapy dog as well as a lifesaver for his new family. The former stray woke Franklin and her daughter, who discovered that their house was full of smoke. His early warning allowed them to escape and ensured that the house was saved.

South Carolina dog Treeny was missing a back paw and struggled to walk when she was adopted. Fitted with a prosthetic paw, she now inspires people who wear prosthetics.

Pets with disabilities can be everyday inspirations as well. Jennifer Menzie Dentino has a Parson Russell Terrier named Kaos who is deaf. Together they learned sign language and now compete in agility and rally. “She’s amazing,” Dentino says. “She has added so much to my life. She’s made me a better trainer and a better person. Kaos has taught me to never limit yourself.”