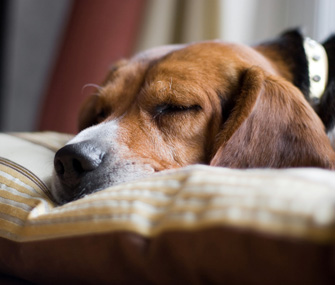 Thinkstock
Your dog might not sleep in your bed because it's too soft, too hot or too small.

I don’t know about you, but my dogs all seem to think that my bed belongs to them and that they’re just being generous in letting my wife Teresa and me sleep with them. And on some of those cold Idaho winter nights — when the temperatures fall to “three-dog” levels — we’re awfully grateful for their presence.

Some of my clients tell me, though, that their dogs won’t sleep with them at all. They sound a little aggrieved sometimes, as if they’re wondering why they’re not good enough to be their dog’s bedmate. Of course, we can never know the real answer — maybe our feet aren’t stinky enough or we toss and turn too frequently — but I’ve thought about this and I have some theories about why certain dogs prefer to sleep alone.

Why Your Bed Is Not For the Dogs

The bed has too many cats on it. Think about it: If you were a dog, would you be brave enough to jump up on a bed that had already been claimed by a resting cat — or two? There’s good chance your dog's nose might get swiped with those lethal claws. It's easy to see why he would go sleep elsewhere.

The bed is too hot. Bodies generate heat. Our dogs already have body temperatures that are a few degrees higher than ours. Unless you keep the room temperature at 65 degrees or less (a typical recommendation for comfortable sleep for humans is 65 to 72 degrees Fahrenheit), your dog may simply prefer a cool wood or tile floor or a dog bed that’s placed beneath an open window.

The bed is too soft. Just like humans, dogs may have sleep-surface preferences. A too-soft mattress may not offer enough support. And dogs with heart conditions such as mitral valve disease may find a bed uncomfortable as well. I’ve heard from some of my clients with Cavalier King Charles Spaniels that as the disease progresses, their dogs prefer to sleep on a hard and/or cool surface such as the floor.

The bed is too small. Some dogs like to sprawl. When they have to share a bed with us, there’s just not enough room for them to get comfortable — at least not without kicking us in the face a few times before they get settled. And if we kick or shove them as we toss or turn in the night, dogs may well decide that the floor, sofa or other spot place is where they’d rather be.

Your Dog May Just Have Other Plans

I think lots of dogs view it as their job to protect us at night while we sleep. They sleep next to the bed or even in an outer room so that any intruders will have to get by them first. Sleeping in your bed might be akin to abandoning their post, and they wouldn't want to let you down.

Some dogs just don't like the bed. Dogs are den animals, some more than others. They like curling up in a small, enclosed, dark space. Your bed may simply be too open for your dog.

Other dogs will avoid the bed — unless something is wrong. My team member Christie Keith, who has sighthounds, says she has had two Scottish Deerhounds who never liked to get on the bed. Interestingly, though, both of them would get on the bed when they weren’t feeling well. “It was often one of the signs that something was seriously wrong,” she says.

Finally, your dog may just not want to choose one human's bed over another — some dogs, I think, are too fair to play favorites. Sleeping in one person’s bed would mean slighting another family member, so instead they sleep in the hall so they can keep an eye on everyone. At least that’s the theory.