Amazing Facts About Cats and Kittens 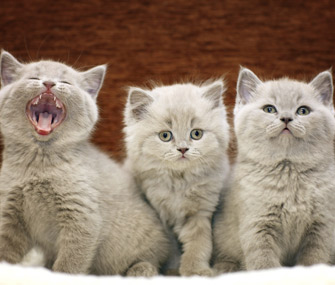 Thinkstock
Our feline friends have better night vision than we humans do.

From glowing eyes to split-second sips, there’s more to these playful companions than their adorable appeal.

Cats have better night vision than humans do and only need one-sixth of the light we need to see in the dark. Both humans and cats have receptors in their eyes called rods, which are required for low-light vision, and cones, which are needed for bright, daylight vision. Cats have more rods and fewer cones than we do. They also have mirror-like cells in their eyes called tapeta lucida, which reflect light back through the retina, improving night vision and giving cats those glowing, alien-like eyes when photographed.

Instead of using her tongue as a scoop, kitty curves her tongue backward, touches the tip to the water’s surface, and then quickly draws it up, launching a bit of water into her mouth. The average house cat can do this four times in one second. How do we know that? Because researchers actually developed a formula to determine lapping frequency for cats based on their weight. Who knew?

Just like camels and giraffes, cats walk using a pacing gait, meaning that they move the two legs on the one side of their body and then the two on the other side. They also walk so precisely that their back paws will hit the ground in almost the same spot that their front paws lifted up from.

Sweating is the primary way we humans cool off our bodies, but cats don’t really sweat, as they only have sweat glands on their foot pads. Instead, they find other ways to cool down, some of which sound pretty nice, like finding shade, stretching out on a cool tile floor, and doing something you’d probably not consider for yourself: licking! Cats groom themselves more when they’re warm because the saliva on their fur helps cool them down like sweat does on our skin.

Cats’ internal clocks don’t work like ours. When it gets dark outside, we usually get tired and sleep until the sun comes up. Cats, on the other hand, tend to sleep more during the day. But that doesn’t make them nocturnal. Cats are actually crepuscular, meaning that they’re most active during twilight, when the sun is rising and setting. Your cat has likely altered his natural schedule to get some daytime playtime in with you.

This article originally appeared in the Spring 2015 issue of HealthyPet magazine.