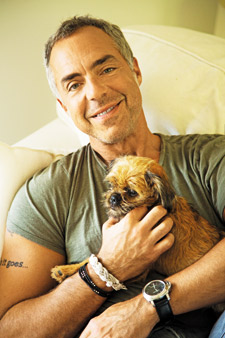 Charles Bush
Waking up with a bed full of dogs, Titus Welliver says, is a great way to start your day.

You might recognize him from his popular roles in movies and TV shows such as Lost, Sons of Anarchy, and The Good Wife. But the star of the new drama Bosch, which premieres on Amazon this February, has another important role he’s enjoyed since childhood: the role of animal rescuer. Growing up, his home was filled with bunnies, guinea pigs, chameleons, and more.

And that’s just the way he liked it. For Titus, this love of animals didn’t come from any stranger. His father, landscape painter Neil Welliver, developed a love for a unique breed of dogs that kept the family in puppies for many years.

“My father became obsessed with a mixed breed that involved Malamutes. And so we started breeding and raising Malamutes,” Titus says. “So my brothers and I looked forward to the breeding cycle and all of those Malamute puppies. We had them for years and years.”

When the family moved full time to a summer home in Maine, they converted it into a working farm. This gave Titus the chance to adopt ducks, chickens, dogs, more rabbits, and guinea hens — as well as any foundlings he ran across, including baby squirrels and field mice.

“My room was a menagerie of injured birds,” he says. “We had a raven that was hit by a car, and we kept it in the wood shed in the summertime.”

The raven was found by Titus’ father on the roadside, and its wing was so badly injured that the bird would never fly again. So they named him Orson, and Titus says his father taught the bird to talk.

Once Titus rescued a baby raccoon, which he eventually had to release when the clever animal began to dismantle his room.

The Road Back To Pets

When Titus went to New York University to study, he knew he didn’t have time to care for a dog, so he lived without pets for the first time in his life. But as he went to school and worked as a bartender, construction worker, and even briefly as a dog walker, he knew he would find his way back to animals.

In his 30s, he adopted a Dalmatian. As his family grew, so did his canine family. Next he adopted a Golden Retriever puppy named Romeo. “He was an amazing dog, and he loved to hike,” Titus says. The family would spend summers and holidays at a farmhouse in upstate Connecticut where the two would take in the outdoors. Romeo’s death left an empty place in his family. So a year later, Titus found his latest canine companion, another Golden Retriever named Mowgli because of his family’s love for The Jungle Book.

Titus would eventually meet his future wife Jose Stempkens Welliver, a fellow animal lover who cared for her own special pets — a Brussels Griffon named Sam and a rescue dog named Maggie, who is a cross between a Whippet and a coyote. (Titus describes Maggie as resembling a Dr. Seuss creature.)

Last summer, Sam got very ill and suffered liver failure. With the help of their veterinarian in Malibu, the family was able to give Sam a peaceful goodbye. “The blessing of it was that we were able to be with him as he went into the next life,” Titus says.

View Next Article: Put an End to Your Pet's Bad Breath

Why Does My Dog Kick Grass After Pooping?