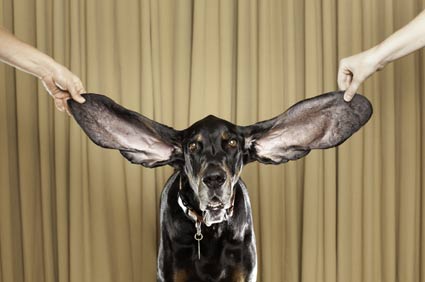 Yes, this dog's ears hang low. Yes they wobble to and fro. But don't even suggest tying them in a knot or tying them in a bow. That's just wrong. But you can celebrate Harbor, the 8-year-old Black and Tan Coonhound who recently earned a spot in the Guinness Book of World Records for having the "Longest Ears on a Living Dog."

The pooch, who hails from Boulder, Colo., boasts enormous ears -- his right ear measures 13.5 inches and the left, 12.25 inches. And while they've brought Harbor and his family a bit of fame, they were troublesome for him when he was little, often causing him to trip and tumble down the stairs. Even now, according to Guinness, his unusually long ears cause problems, as strangers try to come up and give them a tug.

Harbor isn't the only dog to have sported such big ears. Tigger, a Bloodhound from Illinois who died in 2009, had a right ear measuring 13.5 inches and a left measuring 13.75 inches, winning him the title of "Longest Dog Ears" ever. "Guinness World Records 2012," featuring Harbor and plenty of other record-breaking animals, will be available in the U.S. on September 15th, and a 2012 eBook version is scheduled to launch on November 28th.