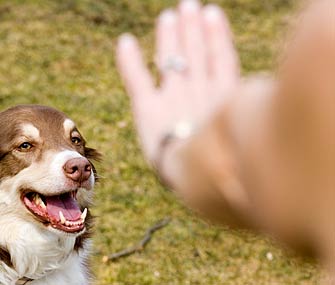 Thinkstock
Don’t let a myth harm your relationship with your dog.

Although dog training has become more of a science than a craft in recent years, some persistent myths still mislead us when reading canine behavior. Don’t let a myth harm your relationship with your pooch. Here, we dispel 14 common myths and look at the facts.

False. Old dogs not only learn new tricks but they thrive when trained. My late Pomeranian, Mr. Teddy, who was adopted at an estimated 10 to 13 years of age, was a training superstar in Vetstreet videos, which were filmed two weeks before he passed away. By the same token, older dogs without housetraining experience as puppies can successfully be housetrained. As long as a dog is mentally and physically capable of learning to perform a behavior and is properly motivated, it’s entirely possible to train her. While intense agility training for Teddy was not realistic, teaching basic commands was.

2. A dog shouldn’t sleep with you or be allowed on furniture, or she’ll think she’s the boss and will misbehave.

False. Just like humans, dogs simply want a comfortable place to lie down. If comfort can be combined with being next to their beloved human, whether it’s right next to you on the couch, or even on top of your lap, then they’re all for it. In rare cases, dogs will guard their sleeping and resting areas, and will show aggression when humans approach these sacred areas. This type of behavior will require remedial training. But for the average Rover, sleeping in bed or resting on the couch has no adverse behavioral effects.

3. When your dog has a potty accident, it’s important to rub her nose in it to let her know what she did.

False. When you rub a dog's nose in her own mess, she often sees no association between that and her having had a potty accident. Nor does rubbing her nose in her accident teach her not to potty on the floor again. Instead, rubbing her nose in her accident teaches her that humans are dangerous and unpredictable, and she will likely begin to hide in safety by sneaking into another room to go to the bathroom, making housebreaking even more difficult.

4. A dog who cowers from people was likely abused in the past.

False. There are various reasons for dogs cowering, and not all of them are because a dog was abused. Commonly, the dog was not properly socialized or had negative experiences during her prime socialization period as a puppy. Genetics also play a role in the fearful dog. Other reasons for a dog to duck away might be that she has learned to dodge people who try to grab her collar, or she is uncomfortable with petting, such as having her ears handled. Unfortunately, well-meaning strangers often approach dogs by bending over the top of their heads and reaching down to pet, which will send timid dogs into a cowering position. A better way to approach is by getting into a kneeling position, with your body turned toward the side, and then inviting the dog to approach you. If you practice this method, it will be less likely to cause a canine to cower.

5. Shelter dogs have too much baggage. It’s better to adopt a puppy to start with a clean slate.

False. Many shelter dogs are well-behaved pooches who, for an endless list of possible reasons, could not be kept by their original owners. Older shelter dogs make ideal candidates for people wanting to skip the puppy stages of chewing, potty training and mouthing. The interview process at most shelters also pairs canine candidates with the family setting that will best suit the dog's temperament, which can create cohesion from the beginning.

6. All dogs should enjoy being around other dogs. It’s essential for dogs to go on outings with other dogs, such as at the dog park. If a dog doesn’t enjoy other dogs, there is something wrong with her.

False. Not all people are social butterflies and neither are all dogs. Some dogs may prefer solitude and only a small, select group of people. Dogs also have their own preferences when it comes to other canines. Breeding can play a big role in their sociability, with terriers being notorious for contentiousness with other pooches. Other times, whether from lack of socialization as a puppy or simply an individual preference, dogs may not enjoy canine comradery. Even though plenty of dogs enjoy the dog park, not all of them enjoy the idea of dozens of other dogs frolicking around them and would instead prefer a quiet walk with their owners.

7. You should let dogs just fight it out when they get into a scuffle.

False (well, at least partly false). It’s true that you should never get into the middle of a dog fight, because some of the most damaging dog bites occur when owners try to separate fighting dogs. There are some tactics you can use to break up the scuffle without actually getting in the middle of the fray. Try using water, a really loud noise, or even a distraction like grabbing a treat bag or using voice to direct them to do something else. Owners should do everything they can to prevent another fight in the future. Often dogs don’t settle matters on their own, and fighting intensifies over time, especially with dogs in the same home. This calls for advanced training with the help of an animal behaviorist or a certified professional trainer.