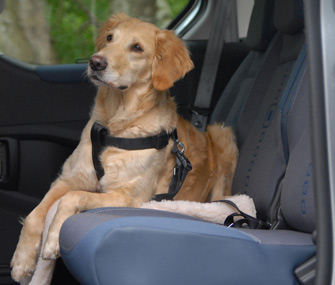 Alamy
Humans aren't the only ones who should buckle up in the car. Restrain your pet in your vehicle with a pet safety belt or in a carrier that is secured.

A few months ago, one of my feline patients suffered a scary double whammy. On a road trip, her owners’ car was struck by another during a high-speed incident. The carrier she was riding in was ejected from the vehicle and, presumably upon landing, broke open. Though no one saw her run, by the time the proverbial dust had settled, she was nowhere to be found.

Every year, beloved pets suffer in all kinds of unnecessary ways. Sometimes they’re violent (think car wrecks and being hit by cars) but, mostly, they’re insidiously habitual, if equally tragic (like being lost during travel and subsequently euthanized in the name of population control).

Some of these may seem like strange and improbable events, possibilities you’re unlikely to encounter in real life. But others are way more common than pet owners may realize.

Take motor-vehicle crashes as an example: Though no firm statistics exist on pets as passengers in motor-vehicle accidents, based on the numbers of cars, accidents and pets riding in cars, we can assume that accidents are a relatively common cause of injury and death among pets in the U.S.

A Car Safety Checklist for Pets

Which brings me to my list of common automobile safety features pet owners should not ignore, beginning with the poster child for such items: the seat belt.

1. Pet seat belts.Though widely regarded as the No. 1 safety measure responsible for the dramatic reduction in accidental human deaths in recent decades, seat belts are only rarely employed by pet owners.

What’s up with that?

As it turns out, seat belts aren’t employed in pets for the same reasons they meet with resistance among people: They seem like an unnecessary annoyance. The “It won’t happen to me” mentality is widely believed to be responsible for this irrational mind-set. Meanwhile, pets are injured or prove injurious to others. Sadly, I’ve seen lots of examples firsthand.

2. Carrier restraints. Pet owners who travel with pets in carriers tend to assume their pets are safe as long as they’re contained. Unfortunately, my personal experience contradicts this. Not only does the example in my opening paragraph disprove this theory, I’ve been unlucky enough to have observed the unnecessary deaths of several pets who’d been contained in unsecured carriers during a crash.

Though a carrier restraint can't guarantee your pet won't get hurt in an accident, preventing the carrier from becoming a projectile inside the car may have its merits.