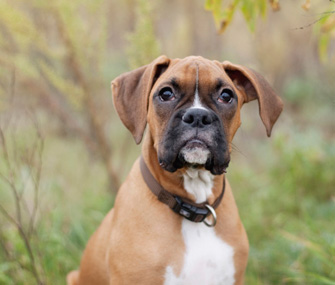 Anita Peeples, Animal Photography
The Boxer's wrinkled face may make him look worried, but he doesn't need to worry about his popularity — he's the No. 8 breed in America.

The Boxer is instantly recognizable, with his wrinkled face and stocky build. The breed ranks eighth in popularity among those registered by the American Kennel Club, which first registered a Boxer in 1904. Get to know one of the most popular dogs in America.

1. They got their start as police dogs.

The modern Boxer was developed in Germany in the late 1880s as a working dog. Boxers were trained for police work and became some of the earliest guide dogs. In fact, they served in the German military during World War I as messengers and scouts.

The Boxer is generally high spirited, energetic and smart, and he tends to be fun and happy. With training, structure, stimulation and exercise, he can be very well behaved. But if he’s bored, look out — he can do a lot of damage.

This sizeable pooch — males can weigh up to 70 pounds, but females are smaller — can be quite athletic. Many are good at agility training and herding, which was one of the breed’s original functions.

The Boxer tends to be suspicious and alert around strangers but not aggressive. And when it comes to being around people he knows, a well-socialized Boxer should be happy and friendly. This is a dog who typically loves human affection and can make a great family dog and companion for children.

5. They may need sunscreen.

White Boxers, like other white dogs, tend to burn in the sun. They may be at an increased risk of skin cancer. It’s OK to use sunblock! But don’t choose one that contains zinc oxide — it’s toxic for dogs. Talk with your veterinarian about which kind of sunscreen is best to use on your Boxer.