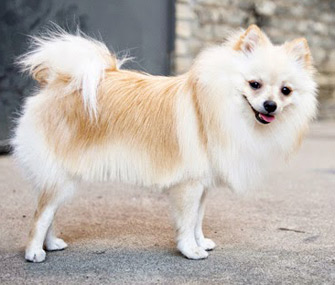 Karin Newstrom, Animal Photography
He may be tiny, but the Pomeranian tends to have a bold and feisty personality.

The Pomeranian is a tiny, fluffy, bright-eyed dog and he’s certainly adorable. (Exhibit A: Boo, the world’s cutest dog and quite possibly the most famous Pom on the Internet.) Learn more about this popular, often-feisty pup and whether he might be the right dog breed for you.

They tend to think big.

Usually weighing in at 7 pounds or less, the Pom is a tiny pup. But don’t tell the Toy breed that — he tends to have a bold personality that you might expect of a much larger dog. He typically has a take-charge temperament and plenty of energy and likely won’t be content to be toted around in a purse.

They can make good watchdogs.

Don’t let his size fool you. The Pomeranian is typically clever and courageous and likely to alert you to visitors.

They tend to be athletic.

The Pom typically has a high activity level and tends to excel at dog sports like freestyle, agility, obedience, rally and tracking.

The breed's thick, beautiful double coat comes in many colors and patterns and is typically easy to groom.

The Pom is typically an extrovert and can even get along with other pets. However, he’s not a good choice for young children since he’s too delicate to be handled roughly.