8 Things You Should Know About the Cuddly and Popular Hamster 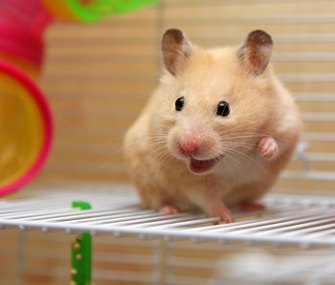 Thinkstock
Hamsters have a high metabolism and require a lot of exercise.

Hamsters may be small, but these friendly “pocket pets” sure have big hearts. The cuddly, furry critters are one of the most popular small animal pets. Here are just a few of the many interesting facts about hamsters and their habits.

1. Hamsters were “discovered” in the Syrian Desert less than 100 years ago.
Although hamsters are native to various parts of the world, Syrian hamsters are the most popular pet hamsters. Also referred to as golden hamsters and teddy bear hamsters, these fuzzy fellows grow to about six inches long and live, on average, two to three years.

2. Hamsters are nocturnal creatures.
Because they sleep all day, hamsters can be very noisy at night. It is best to keep them out of your bedroom if you don’t want them disturbing you while you sleep. They can run on wheels in their cages all night long. During the day, they should ideally be kept in a quiet, dim area and left undisturbed to burrow and sleep in their cage bedding.

3. Hamsters love to hoard their food.
In fact, the name “hamster” comes from the German word, hamstern, which means “to hoard.” When eating, hamsters will pack their food in pockets,called cheek pouches, on both sides of their faces to snack on later. These pouches canextend from their jaws to their shoulders. Hamsters should be fed a diet of pelleted hamster mix, a small amount of nuts and seeds, as well as some fresh produce, such as spinach, apples and carrots.

4. Syrian hamsters do not like company.
Syrian hamsters will fight if kept together, so it is best to keep each one in its own cage. Their territorial nature begins at about 6 to 10 weeks of age, so separate them at that point.

5. Hamsters like to sleep in enclosed spaces.
Items like paper towel tubes and small flowerpots can be put into the cage for this purpose. For bedding, use a clean, relatively dust-free, absorbent material, such as shredded paper or Timothy hay. Avoid using pine and cedar shavings; their fumes can cause respiratory problems! In general, wood shavings, corn cob and walnut shells should not be used as bedding, as they are dusty and indigestible if eaten. Hamsters also love to burrow, so provide plenty of material that can be used for nesting (such as white paper towels or shredded paper).

6. Hamsters’ teeth grow continuously.
Therefore, you need to provide them with something to chew on, so their teeth stay worn down and healthy. Wood blocks and toys made from hay are good for this purpose, but avoid cedar, pine and soft plastic items, because they can be harmful if ingested.

7. Hamsters require veterinary care.
Regular veterinary care, including teeth trimming if necessary, will help your hamster live a full and healthy life. If you notice signs that may indicate your pet is ill (e.g., diarrhea, runny nose, shaking, skin lesions, unusual behavior), take him to the veterinarian as soon as possible.

8. Hamsters like a good workout.
Because they have a high metabolism, hamsters require a lot of exercise. A hamster wheel will keep them busy, but keep it oiled with mineral oil if the cage is near your sleeping area, or you may end up hearing your hamster jogging all night long. Hamsters also enjoy rolling around on the floor inside clear plastic hamster balls made specifically for that purpose. Just be sure to monitor the hamster in its ball as it rolls, so that it doesn’t roll off a table or down stairs and get injured.