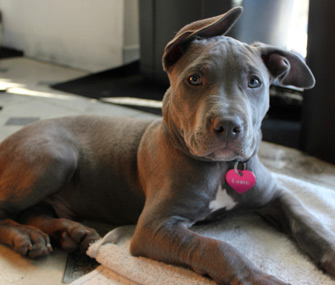 Thinkstock
In Miami-Dade County, where veterinarian Dr. Patty Khuly works, it's illegal to own a Pit Bull. But these dogs still need health care. So what do vets do?

Since 1990, Miami-Dade County, the municipality in which I reside, has required that all veterinarians post a prominent sign in English, Spanish and Creole with the following verbiage:

“BOTH PURE AND MIXED BREED PIT BULL DOGS ARE CLASSIFIED AS DANGEROUS. IT HAS BEEN ILLEGAL TO ACQUIRE A NEW PIT BULL DOG SINCE JANUARY 1, 1990. Section 5-17.1, Miami-Dade Code.”

So you understand, that means Pit Bulls and mixes thereof are 100 percent illegal. But that doesn’t mean veterinarians are on the hook for having to report their patients or tattle on their owners. Though we can be fined $500 every day we fail to display this sign, we’re otherwise not required to play the role of Pit Bull police.

But that doesn’t mean we’re comfortable with this arrangement.

For starters, many veterinarians are opposed to the kind of breed-specific legislation exemplified by this so-called “Pit Bull law.” After Miami-Dade enacted it, hundreds of municipalities followed suit, ushering in a wave of dog-breed bias on the basis of appearance alone. To which, many veterinarians responded: “Where’s the science? Is there any credible evidence to show these dogs are more dangerous than others?”

In a sweeping study conducted by the U.S. Centers for Disease Control and Prevention and published in the Journal of the American Veterinary Medical Association in 2000, the following conclusion was reached: “Although fatal attacks on humans appear to be a breed-specific problem (Pit Bull-type dogs and Rottweilers), other breeds may bite and cause fatalities at higher rates. Because of difficulties inherent in determining a dog’s breed with certainty, enforcement of breed-specific ordinances raises constitutional and practical issues. Fatal attacks represent a small proportion of dog bite injuries to humans and, therefore, should not be the primary factor driving public policy concerning dangerous dogs. Many practical alternatives to breed-specific ordinances exist and hold promise for prevention of dog bites.”

This led the American Veterinary Medical Association to publish a statement on the subject titled Why Breed-Specific Legislation Is Not the Answer, which aptly echoes the sentiments of most veterinarians I know: Dog-breed stereotypes and breed-specific legislation will not keep our communities safe from dog bites. Focusing on individual dogs with a prior history of violence and teaching citizens how to recognize risky human-canine scenarios will.

Despite what seems to be a steady, science-fueled rollback of many of these laws in recent years, Miami-Dade County, among many others, remains staunchly protective of its ban in the name of “protecting citizens.”