Habituate: To become accustomed to a specific situation through repeated exposures. A cat may alert at a noise, for instance, but after hearing the noise repeatedly, she may become indifferent to it and begin to ignore it. This type of learning occurs naturally and doesn’t require a structured training plan. (See also: sensitize.)

Interrupt: To turn a cat’s focus away from an unwanted behavior as an intervention to stop the unwanted behavior. From there, the cat can be redirected to an acceptable behavior. An interruption does not need to be loud or sudden; a slight shuffle of the feet or a quiet clap is ideal.

Lure-based training: Using something that a cat is willing to follow (most commonly food or a toy) to guide the cat into a desired position (a sit, for example). Once the cat is in the desired position, the lure is used as a reward. A lure can be a treat held in the hand, food on the end of a spoon, a toy or any other object that a cat will follow as it is moved.

Management: Controlling the environment so that the cat doesn’t have an opportunity to rehearse an unwanted behavior. For example, a management strategy for a cat that jumps on kitchen counters when food is being prepared is to put the cat in another area, such as a cat-proofed room, during meal prep.

Mark: To use a specific signal at the moment a desired behavior occurs to indicate an acceptable behavior. (See also: marker.)

Motivated: When a cat’s behavior is influenced by something she wants and is willing to work for. A cat who is motivated by games with a wand toy is both willing to play the game and willing to do what she’s asked in order to get access to the game, such as sit before the game is started.

Negative reinforcement: Use of an aversive or undesirable consequence to teach a specific behavior.

Operant conditioning: Increase or decrease in certain behaviors based on the associated consequences of the behavior. For instance, a kitten may learn to be less forward and more polite when she gets swiped with a paw for being too pushy. Or the kitten may learn that when she stalks and pounces on a person wearing slippers, the person shakes his or her feet playfully back, reinforcing the pouncing. The quadrants of learning (positive reinforcement, negative reinforcement, positive punishment and negative punishment) fall under the heading of operant conditioning. 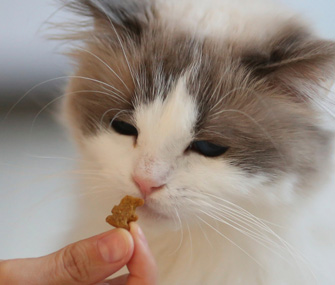 Thinkstock
Positive reinforcement— rewarding your cat with something she values, like praise, a toy or a treat — helps to build her confidence and strengthen your relationship with her.

Positive reinforcement: Use of positive, desirable or pleasurable consequences to teach a behavior. An example is offering a cat a reward, such as a treat or toy, for an acceptable behavior.

Predatory behavior: Behavior that mimics hunting, capturing and consuming prey. In cats, hints of predatory behavior are evident in some forms of play, such as stalking, pouncing on and biting a feather toy. A cat may also exhibit this behavior with live prey—for example, a cat may actually kill and potentially consume a bug or mouse.

Prompt: Using extra reminders, such as pointing, treats or bigger gestures, to elicit a desired behavior when the cat fails to respond to the initial cue.

Punishment: Use of aversive stimuli to decrease or change a behavior. Punishment has a variety of negative consequences. Frequent use of punishment may lead the cat to fear her person. Other unintended negative outcomes may be an escalation of the problem behavior or an increase in aggression.

Push, drop, stick: Shorthand way to know if a cat is ready for the next step in training. Put the cat through five trials of a desired behavior. If the cat can correctly do the behavior four or five times, push to the next level of difficulty. If she gets it right two or fewer times, drop to a previous, easier level. If she gets it right three out of five times, stick to that level.