Home ›
Our Pet Experts ›
Kristen Seymour ›
Do You Buy Your Dog Holiday Gifts?

Do You Buy Your Dog Holiday Gifts? 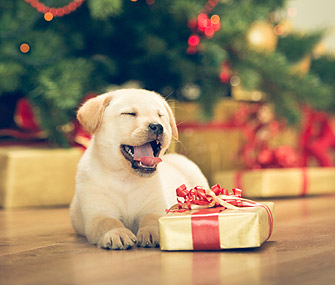 iStockphoto
We bet you won't be surprised by the most common gift our survey respondents said they give their dogs: treats and food!

Is your pooch at the top of your present list? Do you carefully pick out a festive sweater or meaty treat to give your four-legged friend?

If the answer is yes, you're not alone.

We surveyed 1,235 dog-owning Vetstreet readers on their holiday gift-buying habits, and awhopping 96 percent of those who had only dogs (no cats) said that they do give their dogs presents. For readerswho have both dogs and cats, the response was similar: Eighty-nine percent give presents to their dogs. So, clearly, there are some happy dogs out there.

Don't worry though, there are plenty of fussed-over felines as well. We'll share the results of our cat gift survey in another article, but for dog owners who also have cats, 44 percent buy their dogs and catsgifts of approximately equal value. Dogs, however, do still seem to be a bit more spoiled, as 38 percent said they spend more on Fido's gift than Fluffy's, and 6 percent buy gifts for only the dog, not the cat.

But that's just some of the info we discovered. Read on to learn more about how we give gifts to the animals in our lives.

What, Where and How Much?

There's quite a bit of variety in how we shop and what we buy.

The Location: Nearly half, 49 percent, said they shop both online and in stores—so they are equal-opportunity spenders. Twelve percent claimed to be mainly online shoppers and 39 percent said they're primarily brick-and-mortar shoppers. We didn't ask how many of them bring their dogs along with them, but maybe we'll have to address that question in the next survey!

The Gifts: Plenty of pooches should expect to find treats and food in their stockings this holiday, as that was the most popular gift choice, followed fairly closely by toys. After that, there's a significant drop in the popularity of the other gifts on our list—owners said they're less than half as likely to buy holiday-themed items (like toys or clothing), followed by leashes, collars and harnesses, and home items (like bowls, feeders and beds). The least likely gift on our list was services, such as dog walking or grooming.

Beyond Giving to Our Own Pets

We were curious to find out what kind of people like to give presents to their friend's pets as well.

Non-Pet Owners, Not as Much: Among those respondents who do not have pets, the story is a bit different. Most, 72 percent, do not purchase pet gifts at all, with just 5 percent saying they always shop for other people's pets and 23 percent who sometimes do so.Non-pet owners also exhibit different tendencies with where they shopped and what they purchased. Sixty-six percent of those without pets are far more likely to shop in stores. Eleven percent are online shoppers, and 23 percent said they shop both online and in stores.

The Gifts: The most popular purchase among non-pet owners is toys, followed by treats and food—the opposite order ofpet owners' purchases. However, just as we saw with pet owners, there is a significant drop between these gifts and the others on our list: Leashes, collars and harnesses come next, then home items, holiday-themed items, clothing and accessories, and services.

The Best Gift Ever

We also gave readers the option to tell us about the best pet gift they ever bought— hey, we're always on the lookout for great pet gift ideas!

Favorite Presents: As we suspected, our readers are smart shoppers, with many of them giving food puzzles that also challenge their pet's smarts as well.We couldn't agree with this choice more.

Paying It Forward: Perhaps our favorite answer came from a reader who's clearly full of the giving spirit, "I suppose the best gift...was a three-month supply of pet food I gave to aneighborwho suddenly lost her job. She couldn't have [otherwise] kept her beloved little Jack Russell Terrier."

What a lovely reminder of what the holidays are really about!