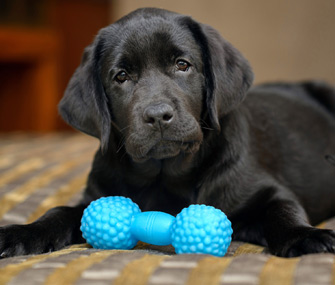 Thinkstock
Avoid giving your puppy toys that are too small or are filled with beads or beans.

Puppies tend to love toys, and it can be fun to shower them with new things. But there are many different types of toys out there, so how do you choose an appropriate item for your young furry friend?

When selecting a toy, keep your puppy's changing size and strength in mind. You should also keep in mind that some toys may pose dangers for your pup, so talk to your veterinarian about the safest toys for your dog. When evaluating the safety of a toy, consider the following:

Remember that as your puppy grows, he will likely also grow out of his toys. For instance, toys that were once an appropriate size for him may become too small and pose choking hazards, and toys he once couldn't chew up may easily be shredded when he's older and stronger, again presenting choking or toxicity problems. So as he gets older, make sure he's got appropriate toys — and make sure you make the time to play with him!