Home ›
Our Pet Experts ›
Caroline Golon ›
Forget Bounce Houses! Have Your Kid's Next Party at an Animal Shelter

Forget Bounce Houses! Have Your Kid's Next Party at an Animal Shelter 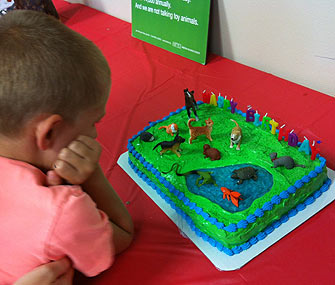 Courtesy of the Arizona Humane Society

In lieu of gifts for the birthday boy or girl, many party hosts request guests bring donations of cash or goods to the humane society.

James says the family that invited Carter to their party provided guests with a list of items the shelter needed. “It shows that the party givers really cared,” she says.

Silverman says her daughter loves animals and she thought it would be a great way to teach her about giving. “I love that my daughter was able to participate in a cause that she cares about. She is growing up with animals, but her love of them is innate,” she says.

Sasha, the birthday girl, asked for donations instead of gifts. Her mother was pleased. “I am also not crazy about the rather excessive gift giving, so I was glad to divert gifts to donations,” Silverman says. “We ended up donating a couple of huge bags of toys and food to the shelter.”

Depending on the shelter, parties range from $150 for 12 kids to more than $250 for up to 20. Varchi says some families donate more than the $150 party fee. With an average of one to two parties a weekend, the party revenue adds up.

And a team of enthusiastic volunteers manages the parties, Varchi says. “We’ve just incorporated birthday parties as part of our regular weekend activities,” she says. “The staff loves it!”

Varchi says they promote the birthday party option on their website, via social media and, above all, through word-of-mouth. Many families come back to host future birthday parties there, as do families of the guests.

Engaging families in this way draws them in to the shelter and often inspires them to be more involved in shelter programs. “These families start adoring the shelter,” Varchi says. And, in the process, they become bigger supporters and advocates.

Varchi says the birthday parties have helped grow their other community programs, including one of their large fundraisers, Critter Camp, which is a summer day camp for kids. “Now the camps fill up very quickly and we’ve increased the length from four weeks to seven weeks,” Varchi says. She also adds that Girl Scout and Boy Scout troop visits to the shelter have also increased since the birthday parties started a year ago. “We get to know a lot of the families, the kids love it and it has really helped build community and support,” she says.

Dr. Haley agrees. “Some families have adopted companions, and others enroll their children in future camps and activities. We’ve also had a number of repeat visitors,” she says.

With pressure on parents and kids to continually raise the bar for birthday party extravaganzas, it's no wonder some families are looking for a more meaningful option. Parties at shelters provide a refreshing alternative with families feeling good about their venue choice. “They tell us that they feel as though they make a difference when they celebrate here,” Dr. Haley says.