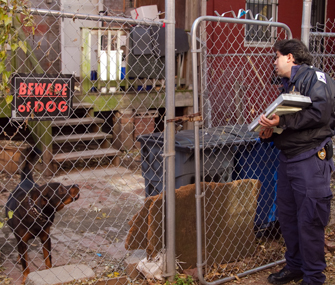 Photo by Hannah Teoh
An officer on the job.

Daniel D'Eramo didn't dream of growing up to be a humane law enforcement officer. Neither did Monica DiGiandomenico.

With a bachelor's degree in criminal justice and sociology, DiGiandomenico was a campus police officer at George Washington University, working on a master's degree in forensic science. When some cats were left in a dorm over a vacation, she met a humane law enforcement officer. "That was the first time that I knew that this job was out there," she says.

D'Eramo went to Penn State to study dairy farming. Then he realized what the job would be like for someone who didn't have a family farm to go back to. "I'd wind up on a large-scale farming operation," he says.After some exposure to that type of operation, a disillusioned D’Eramobecame a vegan, finished his degree and went to work for a national farm sanctuary organization. When D'Eramo decided he wanted to move to an urban area, he got a job at the Washington Humane Society, which handles humane law enforcement in the District of Columbia.

As these two officers' stories show, there's no one clear way to get into the field of humane law enforcement. Even the job itself can differ in different places. In some cities, the officers who enforce animal treatment laws are part of the regular police force, and in some, they're not.

But there's one consistent element: The species that it's most important to get along with is actually humans. The officers spend a lot more time getting people educated than getting them arrested. 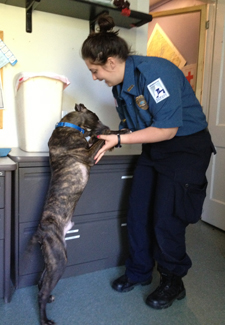 "You're dealing with people sometimes that are intentionally doing bad things to animals," D'Eramo says, "but most of the people that we deal with are being neglectful mainly out of ignorance rather than any real ill will toward the animal."

For example, one of DiGiandomenico's cases involved an underweight mother dog with puppies. She gave the owner advice about feeding them and told him they might need deworming.

"He was more than willing to do that. He was unaware of the fact that that could be an issue," she says. "He was able to get them dewormed, they were starting to gain more weight, and that was all that was needed in that case."

And that's the best kind of success story. "If there's a way I can make the situation better and keep the animal in the home that it's in, that's the first choice every time," D'Eramo says.

D'Eramo may never see a cow in D.C., but his farm rescue background was good preparation because of the people skills and perspective that he learned. "It's this really hard-to-deal-with dynamic," he says. While the farmers were doing things he's morally opposed to, he says, "They're not bad people, they're not mean people."

He sees a similar dynamic in his current job despite the different context. "Even dog fighters — they don't hate their dogs. If anything, they're insanely passionate about their dogs," he says.

The ability to persuade people with different points of view is critical because it may be the only option. Even when officers would like to make an arrest, it doesn't always happen.