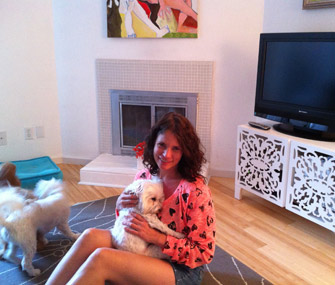 I dialed. Andy and Bogey were at the vet. I had a choice: admit Bogey to the hospital, where they could medicate and hydrate him until I could get home, or give my consent to let him go. Neither of these things sounded like reasonable options to me. It was the proverbial rock and hard place — and there was no good way out.

Tears ran down my face. I paced the floor of the old convent where I was staying in Ecuador, just two days from being home. I sobbed and pulled my hair at the roots. I said the word “OK” over and over between huge breaths. “OK. OK. OK. It’s going to be OK.” I must have spent $50 of that $100 phone call just saying the word “OK.”

And when the time came, my dear friend Andy was on duty.

I asked Dr. Beth Burgin at Katy Trail Animal Hospital in Dallas how common it might be — friends helping friends in this way — and she said that a chronically ill pet having an episode while an owner is away on vacation is quite common. And as far as other people helping an owner through the pain of letting a beloved animal go, it’s simply up to the owner*.

“Having someone step in — especially if it’s a really close friend or a family member who loves that pet, too — is an OK choice. We all do whatever we need to deal with this really difficult time, and some people want to remember their pets the way they have been and not have [euthanasia] be their last memory,” she said.

Letting my sick pets go has been the hardest part of pet ownership for me. Twice I have handled it with less grace than I would have liked, and held on longer than I probably should have. But, when Andy mercifully ushered Bogey from the world this past spring, he gave us both an incredible gift. For that I will always be grateful.


*Vetstreet editor's note: Having a friend or family member step in for you during your pet's final moments is something that needs to be clearly communicated with your veterinarian, and please keep in mind that different practices in various states may have different requirements regarding consent. If possible, have this conversation with your vet before the time comes and leave written instructions for him or her if you know you'll be unreachable in order to avoid making an already emotional decision more complicated.