Home ›
Our Pet Experts ›
Meredith Hooker Williams ›
Is It OK to Kiss Your Dog?

Is It OK to Kiss Your Dog? 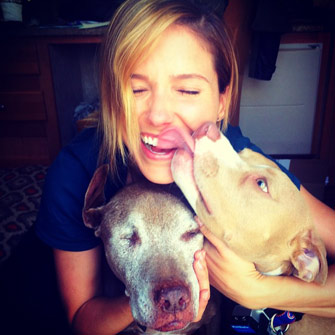 @sophiabush
Actress Sophia Bush gets some slobbery kisses from her pups.

It seems like everywhere you turn, celebrities can be seen giving their pooches some smooches.

It’s adorable, that’s for sure. But is it healthy to smooch on your dog or let your dog lick you?

Wortmann isn’t a dog owner, butsays of people kissing their dogs, “I think most people do it. It’s certainly a mixed bag.”


Dr. Shelley Rankin, associate professor of microbiology at the University of Pennsylvania School of Veterinary Medicine, recommends against it. “It’s my belief, professionally and personally, that you should not let your dog lick your face,” says Rankin, who studies disease transmission between pets and people.

Rankin doesn’t have dogs — she’s a cat person. She has two, one of which is a licker, but she says she doesn’t let him lick her face.

It’s a myth that dog saliva is cleaner than human saliva. There are hundreds of different types of bacteria in a dog’s mouth and, though it’s small, there’s a risk for disease transmission when a dog gives you kisses on your face or mouth, Rankin says.

Pasteurella, a bacterium that lives in the mouths of some dogs and cats, is one of the more common pathogens people can contract from a dog lick or bite. It can cause an infection if it comes into contact with an open sore or wound, Wortmann says. It’s an infection that can progress very quickly in some people; however, it can be treated with antibiotics.

Dr. Thomas Nolan, adjunct professor of parasitology at the University of Pennsylvania School of Veterinary Medicine, notes that transferring parasites is also possible, but unlikely. Parasites like giardia and cryptosporidium are infectious as they leave a dog in its stool. So, if an infected dog licks himself and then offers up kisses, it would be possible to transmit the parasites. But, according to Nolan, the number of parasitic cysts passed on from a lick is probably not high enough to cause you to get ill.

When You Should Take Extra Care

The experts agree there’s no way to tell how many people actually get sick from smooching their dog. However, there are some people who are more at risk for becoming ill.


Take babies, for instance, Rankin says. While it may be cute to see a pup lavishing an infant with kisses, it’s not healthy. That’s because babies’ immune systems aren’t fully developed. Other people more at risk for getting sick from kissing their dog include those with compromised immune systems — for instance, a diabetic or someone receiving chemotherapy, Wortmann says. Additionally, pregnant women, the elderly and people with open sores on their faces — such as teenagers with pimples — are at greater risk. Rankin explains, “Anywhere the skin is broken, there’s potentially a risk.”

Wortmann agrees. If a patient has an open wound and is exhibiting certain symptoms, he’ll ask if that person is a pet owner. For instance, he’s had cases in which a pet licked the open wound of a diabetic and that person became ill.


Responsible pet ownership reduces the risk of disease transmission. Rankin says, “Obviously, some zoonotic diseases are preventable.” In addition to regular veterinary care, it’s important to deworm your dog and keep him from scavenging, she advises.

Another concern is around dog bites, which happen to 4.5 million Americans each year. You may think your sweet pooch would never hurt you, but the American College of Veterinary Behaviorists notes, "Any dog, including the floppy-eared family pet youshare your bed with,may bite." As trainer Mikkel Becker explains, when you are face to face with a dog, you can be intruding on your pet's personal space, which may be threatening to the dog,and particularly risky for children. According toThe American Humane Association, 66 percent of bites among children occur to the head and neck.


So, abstaining from kissing and licking is the best tactic — if you can help yourself, Rankin says.

“Is there a risk? Absolutely. Should you do it? No. Will you do it? Probably,” Rankin says.