Home ›
Our Pet Experts ›
Kim Campbell Thornton ›
Is Your Pet Safe When Riding in the Car? Tips to Help Ensure the Answer Is Yes

Is Your Pet Safe When Riding in the Car? Tips to Help Ensure the Answer Is Yes 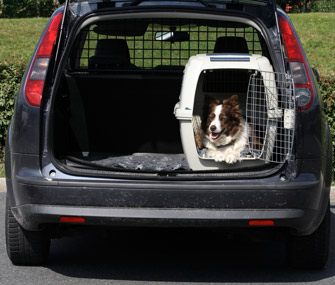 Alamy
Everyone in your car will be safer if your dog or cat is confined or restrained.

You put your dog or cat in a crate, car seat or harness when he rides in the car. Seems like the right thing to do, doesn’t it?

Pets who become projectiles can injure car passengers or even go through the windshield, resulting in injuries ranging from bruises and contusions to broken bones and paralysis — or even death.

Keep Pets Safe on the Road

Let's start with a basic truth: Everyone is safer when pets are confined or restrained. “Too many times, people are taking pets to the vet or picking up kids at school, and they get distracted by the pet’s movement or vocalization,” Dr. Marty Beckersays. “They take their eyes off the road to check on them, turn and baby-talk them, or try and touch them in an effort to comfort them.” For this and other reasons, it is important to always secure your pets when they are riding in the car.

But the wrong crate or harness — or one that is used incorrectly — can be almost as dangerous as doing nothing. Veterinarian Elizabeth Colleran says that in some crash test videos she has watched, the figures of crash test dogs or cats hit the side of the carrier with a significant amount of force, sometimes enough to break through the carrier. In these cases, the carrier ends up fracturing as the dummy animal flies out.

This is a hazard in real life, too. Lindsey Wolko’s dog, Maggie, was seriously injured in 2004 while wearing a car harness for pets. That led Wolko to investigate pet restraint manufacturing practices. In 2011, she founded the nonprofit Center for Pet Safety (CPS) to establish crash test standards for pet carriers and restraints, and certify those that made the grade.

While having your pet in a carrier is an important first step, securing it properly is also important, as this can help prevent the carrier — and your pet — from being tossed around in the event of a crash. Specifically, don’t hold a carrier in place with the seat belt unless it is specifically made to be used with a seat belt. While the seat belt might seem like the safest way to hold a carrier in place, Wolko says it can crush a carrier in the event of a collision. Instead, tie carriers down with strength-rated anchor strapping.