Keep Your Dog Motivated During Training 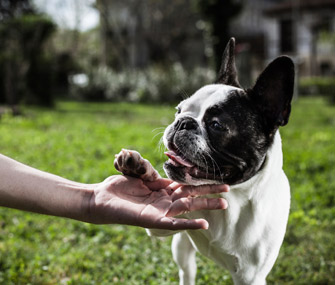 Q. I’ve noticed that in a training session my dog doesn’t seem to get what I am teaching him, but then a day or so later he will have it down perfectly. Can a dog learn something but not perform it right away? How is that possible?

A. Animals are learning all the time, but their mastery of new information is not always immediately evident. This can be caused by a variety of factors: Your dog may not be getting the right rewards, he may need more rest, or he may be tired at the end of your training sessions.

In some cases, an animal may learn a behavior but not display it right away. Later, the behavior may occur in response to the right incentive. This is called latent learning.

Latent learning was first seen in a 1933 study of rats. Rats who were amply and frequently rewarded easily learned to navigate a maze fairly easily; those who were not rewarded took more time to get through the maze. But rats who were denied a reward early on and then offered one later in the process suddenly seemed to master the maze; those rats initially took as long as the unrewarded rats to get through the maze, but once there was a reward waiting, they completed the maze at the same pace as the group that had been rewarded all along. They clearly knew how to do the maze, they were just waiting for the right reward.

Your dog may not be exhibiting the behaviors you are teaching him in training sessions simply because he’s holding out for a better reward — or any reward at all.

Another aspect of learning, for humans and canines, is sleep. Sleep helps animals process and consolidate information acquired during the day. After sleeping, animals may return to training better able to demonstrate previously learned behaviors and process new information. Your dog may literally need to sleep on what you’re teaching him in order to master the new behavior.

It is also possible that your dog is more motivated to do as you ask at the beginning of a training session, rather than at the end — which is when you are most likely to return to the behaviors you were trying to teach at the end of the last session. In each of these cases, your dog will appear to suddenly be able to do something he was unable to do the last time you worked with him.

There are other possible explanations for your dog’s delay in exhibiting a new behavior. Sometimes dogs get frustrated when training progresses too fast; in this case, a dog may be unsure what is being asked of him, and thus unable to do the right thing. In addition, when a dog goes too long without being rewarded, he may give up engaging with the training. If you think this is the issue, go back to an easier step in the training and increase the frequency of rewards — this frequently solves the problem.

Dogs have a limited focus when they are training. To help your dog stay on task, keep training sessions short. An optimal training session is between one and five minutes long, with 10 minutes as the absolute maximum.

Dogs also have a limited ability to delay gratification. It is important to limit the periods during training where your dog must demonstrate self-control. This can include behaviors like wait, leave it and stay.