Kitten Kindergarten: How Cats Can Benefit From Early Socialization and Training 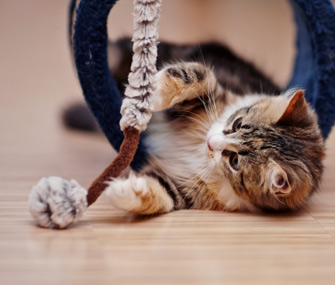 Thinkstock
Attending a kitten kindergarten exposes your young cat to new toys, obstacles, people and other felines.
Kindergarten isn’t just for kids. Kittens can also benefit from a kindergarten education!

Of course, a kitten’s classroom is quite the contrast to a child’s. Instead of whiteboards, desks, pencils and paper, a kitten classroom often consists of feather toys, treats, obstacles, affectionate humans and kittens galore.

Kitten classes and playgroups have become increasingly popular. Just like puppies, kittens also benefit from socialization and training. In class, kittens and their people learn important skills to help the young felines succeed in the world. Where classes aren’t available, kittens may be "homeschooled" by gradually exposing them to new people, sights, sounds and experiences, such as visits to the vet or groomer, while combining each new adventure with positive treats, praise and petting. The socialization can help kittens feel more secure in social situations and confident when encountering events like car rides and vet visits.


Cats can be trained as adults, but the most effective time to train and socialize a cat is in her first months of life. That's when cats are often more open to having new experiences and establishing new relationships, and they have a greater ability to bounce back from mildly upsetting situations. Socialization works to expand a kitten's bubble to include a wider variety of situations, people and animals. The positive experiences a cat has as a kitten can dramatically impact personality, behavior and confidence as an adult. Most cats are not inherently fearful, but they often become that way due to poor socialization as kittens. Without guided efforts, most kittens experience a limited view of life consisting of their familiar people and home. Later, when the cat experiences a situation outside of her familiar bubble, she's likely to panic.

Some people may neglect to socialize kittens due to lack of awareness about the importance of socialization; others may have concerns about exposing kittens to potentially contagious diseases. It’s important to talk to a veterinarian to determine when it's OK to expose your kitten to other cats and to find the right balance of appropriate risk and socialization. Until you receive the OK from your veterinarian, it's always best to limit your kitten's exposure to unvaccinated cats.

One of the most important skills kittens gain in class is how to properly interact and play with other kittens. Many adult cats have limited tolerance of other felines. Kitten class and playgroups can improve a cat’s ability to get along with other cats by improving her ability to read and use body language to communicate and learning to play in a more gentle fashion.

Kittens can also benefit from having positive experiences with other species, especially dogs. Without positive exposure, a kitten may bolt or hiss and scratch if she encounters a dog. Early experience around friendly, tolerant and laid-back dogs can lessen a cat’s fear of canines. During this time, it’s important to not only provide positive experiences but to also prevent negative experiences. A scary situation, such as being chased by a dog, could increase the kitten's fear.


Kittens also need to encounter a variety of people in a way where they associate people with various rewards, such as petting, play and treats. Too often kittens meet a limited amount of people during their socialization period. As such, a cat may be friendly with her familiar humans and anxious around unfamiliar people. If a kitten meets and has a positive experience with a wide variety of people of different ages, sizes and genders, she is more likely to be friendly with people as an adult.

Preventive training also teaches cooperative behaviors to help felines relax in events like being examined, having nails trimmed and taking medication. In class, kittens are given a variety of places to explore to build their confidence around situations, like being placed on a scale, navigating a tunnel and hearing a variety of noises.


Misconceptions about cats being untrainable and impenetrably independent abound. But given the right start, kittens are often more than willing to show off their true social and learning potential.