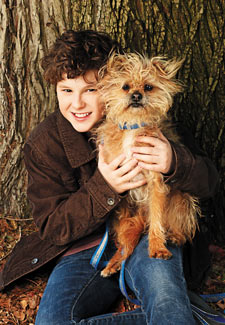 Starting at the age of 3, Nolan Gould has been acting ever since. Now the teenager is part of the wildly popular Emmy-award-winning Modern Family. Playing the offbeat child Luke Dunphy, he marches to the rhythm of his own drum. He’s also acted in several movies, including “Friends with Benefits” and “Space Buddies.” In his spare time, this bright young man — he’s a member of Mensa — enjoys playing music, practicing parkour, camping, and, of course, spending time with his pets.

For Gould, his dogs provide comfort after a long day’s work. “They’re there to greet me at the door, bouncing up, saying ‘hi’ to me, kissing me, and licking me.” Oftentimes we might wish our pets could know what our day was like. In one sense, Gould has that wish granted. Daisy was once a movie star, too. “I feel like I share a common bond with my Golden Retriever because we actually worked on a movie together,” he says. “So I feel like we both kind of understand acting.”

Daisy acted as Gould’s dog in the Disney film “Space Buddies.” He says from the first moment he worked with her, he knew he loved her—and the affection was mutual. “The first thing we shot I was supposed to say good-bye to her because I was leaving for school, and the dog was supposed to follow me,” he says. “They were scared because she was a puppy, and they didn’t think that she would actually follow me. But she just liked me so much, because I was playing with her earlier, that as soon as I walked away, she followed right after me.”