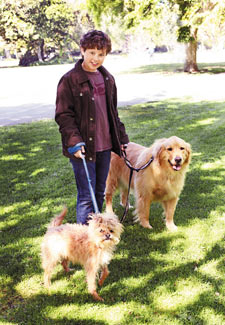 Gould calls Daisy his “best Christmas gift” because he got her right around the holiday. “She was actually born on December 3rd, and when the movie was done they said, ‘Hey, you can keep Daisy if you want.’ I got her right about Christmas time.”

Rusty, Gould’s small mixed-breed dog, came into his life on quite a different path. The family had gone to a shelter to adopt a cat because they were living in an apartment at the time and didn’t think a dog would fit their lifestyle. “But we went there and we saw Rusty, and he was just so cute and had a great personality.” It turned out that apartment-living suited Rusty just fine. But now, in a house with a huge backyard he can play in, he’s even happier.

There’s also a cat in the family named Asia, and Gould says they all get along great. “The whole myth that cats and dogs don’t get along, that’s completely false,” he says, “because we introduced Daisy and the kitty together when they were both really young, so they’ve really bonded. Sometimes my cat will be just walking down the hallway and Daisy will be lying down, and the cat will come up and start licking Daisy’s face. So they get along really well. It’s very nice to have that peace in our house. They’re like three little kids together.”

Gould knows his pups routine so well that he can imagine what they’re doing while he’s away at work. “I do kind of get a little anxiety being away from them, that’s why I keep little pictures with me on my phone or on my iPad. So when I miss them, when I’m gone for five weeks shooting a movie, I just pull it up.” Luckily, there’s no separation anxiety for the dogs. His dog Rusty used to have issues, but now that Daisy’s around, he’s calm staying at home, Gould says. 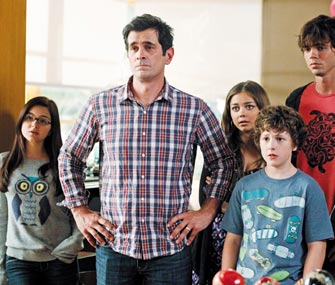 A Look at a Modern Everyday Family, With Pets

While the dogs don’t recognize Gould when Modern Family is on, they do enjoy watching TV with him. “Our cat wanders in every once in a while and looks at the TV, so does Rusty, and Daisy just sits there… mesmerized by it, especially the dog shows. She loves watching other dogs.”

During the day, while Gould’s being homeschooled, Daisy often sleeps under the table by his feet. Rusty and Asia aren’t far away, sleeping on a big pet bed in the dining room.

The dogs also love listening to music. “I’ll get out my stand-up bass or my banjo or something, and I’ll just be playing my little music and the dogs will come along. They’ll just lie down and watch me play and listen along.”

Part of Gould’s routine is taking regular walks with the dogs. While you’ll usually find him in casual clothes—a long-sleeved shirt and jeans—when he takes Daisy on long walks, he’ll switch to something even more comfortable. “With Daisy I usually wear exercise clothes, because I take her on anywhere from 45 minutes to an hour walk.” Sometimes instead of walking, Gould rides his scooter or bike, and Daisy runs alongside.

Daisy is also a fan of camping trips. One of Gould’s favorite places to camp is Red Rock, in the Mojave Desert. Even though it’s very hot there, Daisy enjoys hiking and also chilling out. Of course, she has plenty of water.

Gould says everyone in his family loves animals. But, for now, they won’t be adding anymore anytime soon. “I’m always petitioning my mom to try to get another pet in the family. So far it hasn’t worked because we have a lot of pets. But everybody in our family, we really, really enjoy their company.”