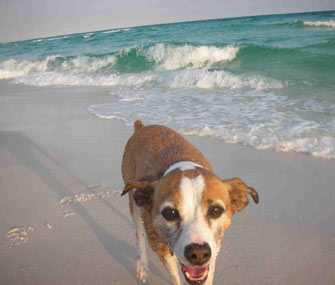 Credit: Carolyn Mason
Doug chases waves at the beach in his younger years.

Doug the Dog is both dignified and befuddled in his 17th year. He has an old man aroma — slightly stale, rotten-toothed and damp from the growths that sprout like mushrooms on his hind legs. He’s completely deaf, partially blind and has taken to standing in front of a random wall and licking it. We have been told we should get another dog so the transition between now and what is to come will be easier. “We are dog people,” I remind my husband when he declares Doug our last pet. But we don’t speak of it much.

Nobody told me that getting a dog when your kids were little would mean the kids and the dog would age out at the same time. I don’t know how it has come to this — having an empty nest and old man dog named after their favorite cartoon character of the time. Just when we are finally free of the joy of teenagers, we now have to contend with the guilt of leaving behind a confused and slightly daft dog.

We Adjust to Changes

He can’t go to the Pet Hotel anymore because he’s already just an old bag of bones and won’t eat or drink when we leave him. Which is why he was at the New Year’s Eve wedding of our oldest daughter this year.

She wanted to be married at the same beach where Doug once chased waves, barking furiously at their crest and crash, determined to beat back Mother Ocean’s relentlessly tormenting tricks.“He’s not too bright?” commented a spectator, watching the futile, frantic sprints of a younger/spry Doug the Dog as he raced up and down the shoreline, hoarse with the fury and responsibility of his mission.

Of course, I was offended. The man saw a ridiculous effort to catch a wave, but I saw the pursuit of potential, the sweet thrill of possibility.

Once, when Doug was a few years old, an old fellow in a pickup truck pulled up next to me. He leaned out the window, squinting in the sun, and asked me, “How much you want fer that squirrel dog?”I was indignant (and not a little pleased) and told him my dog was not for sale.

Other than treeing squirrels, Doug doesn’t have too many other talents to speak of. He is loving and loyal but not the brightest crayon in the pack. 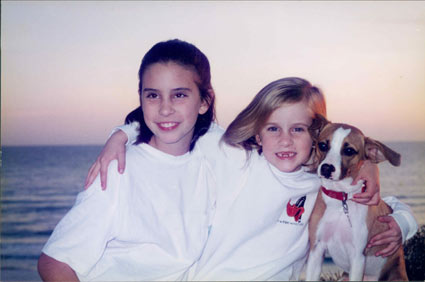 When the last daughter left for college, Doug waited next to the front door for her return. Nothing we did could dissuade him from his vigil. One night, a few weeks after she left, I heard the pitter-patter of his toenails tapping into our bedroom. He stood at the edge of the bed and looked up at us with eyes filled with sorrow. I patted the mattress on my side, and he jumped up, walked in circles, twirling the blanket into a nest, let out a long and mournful sigh, and went to sleep.

He sleeps with us now, even when the girls return. I think he knows better than to let his heart re-break. I admire him for that.