Home ›
Our Pet Experts ›
Dr. Patty Khuly ›
One Vet's Opinion: Why Do We Breed Dogs Who Can't Give Birth Naturally?

One Vet's Opinion: Why Do We Breed Dogs Who Can't Give Birth Naturally? 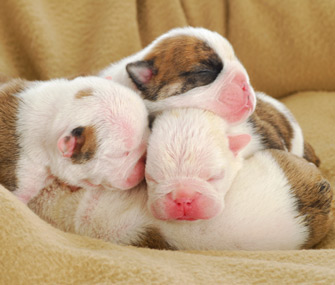 Thinkstock
Breeds with heads that are disproportionately large and broad, like Bulldogs, are some of most common candidates for mandatory C-sections.

It’s complicated. It’s controversial. The cesarean section for breeds of dogs and cats incapable of natural birth is a subject uncomfortably entrenched at the intersection of purebred breeding, animal welfare and veterinary ethics.

Commonly believed to have been named after the Roman emperor whose mother bore him by traditional means, the so-called C-section pioneered a dramatic surgical solution to retrieving babies whose mothers had died in childbirth during the same era. Yet by modern standards, this impressive surgical procedure is regarded as straightforwardly routine, a “no biggie.”

Indeed, in the last few decades we have witnessed a striking trend toward this surgical alternative to vaginal birth. Not only is it treated as an elective for women who prefer not to undertake a process that’s potentially damaging to their delicate nether parts, some physicians subscribe to the belief that a C-section is always preferable to a natural birth.

Why traumatize the patient? Why risk the baby’s life?

Not so fast, says a growing legion of physicians. The movement in obstetrics toward C-sections, they claim, has more to do with hedging against malpractice claims and padding bills than anything else. In fact, a growing body of evidence supports the argument that mothers and babies fare better in the long run when physicians are less aggressive about rushing babies out of the womb.

Meanwhile, at the Vet Clinic

So what does this debate have to do with purebreds, animal welfare and veterinary ethics?

Though most small animal veterinarians perform emergency C-sections on a fairly regular basis (typically when the female has gone well past term or when labor is significantly prolonged), few of us believe that both moms and babies are better served by this approach. “Natural birth is always preferable” is the prevailing party line.

Nevertheless, plenty among us have had cause to schedule C-sections in advance. In these high-risk cases, pets must be delivered just before their due dates.

In most cases, it’s because the likelihood is high that the patients won’t survive a natural birth. Sometimes we learn this when we take X-rays between day 45 and 60 of a canine 63-day gestation period and find that the babies inside are way bigger than we expect (as happens often when the paternity is in question). Other times it’s because we know for sure that dad is a big dude and mom is a little bitty thing by comparison (we call these accidental trysts “mismatings”).