Home ›
Our Pet Experts ›
Overcoming Obstacles: Behind the Scenes at an Agility Dog Competition

Overcoming Obstacles: Behind the Scenes at an Agility Dog Competition 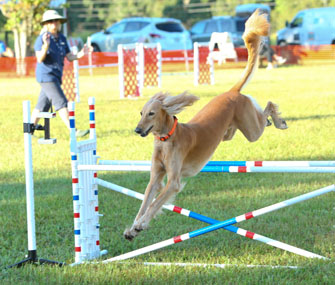 Photo by Furry Fotography
Over the last jump! The clock stops when Pepe breaks the light beam of the electronic timer; you can see them on either side of the jump. One problem that day: There were so many love bugs flying around the lights they kept setting the timer off early!

I feel nervous even before my agility dog and I pull into the competition grounds. What if we're late? Will I forget the course? Will it be too difficult? What of the hundreds of things that can go wrong will go wrong at today's agility trial? Pepe is unfazed, asleep in his crate. As usual.

I am not among the elite competitors in the agility world. I don't run a Border Collie, Papillon, Golden Retriever or any other traditional "agility" breed. I run my Saluki, Pepe, and although he's near the top in the Saluki agility world, that's a very small world.

But I'm also not unusual in the agility world. I'm one of many who run non-traditional breeds; I see a Chesapeake Bay Retriever, Cavalier King Charles Spaniel, Welsh Terrier, and a variety of mixed breeds already at today's trial. We will probably never earn a MACH (Master Agility Champion). We will not make any world teams. You will not see us on television. We aren't aiming to place first; we just want to qualify.

7:30 A.M.: I walk Pepe, but as usual, he pretends to be devoid of bodily functions. This always sends me into an internal frenzy, as I envision him relieving himself in the ring, ruining not only his run but possibly that of dogs to follow. (He has never done this, but my imagination runs amok.) The clock is ticking, and he's still procrastinating. The course is built, people are walking around in the ring, and before we know it, time's up!

8:00 A.M. I begin the walk-thru, solo, which is a hugely important part of agility. Every agility course is different. You never know what it will be until you arrive at the trial and see the course plan. But to really learn the course, you have to walk it without your dog.

This first class is Jumpers With Weaves (JWW), which means it's made up of only jumps, weave poles and possibly tunnels. Pepe runs in the highest level, Masters, which means he has to be flawless to pass. One single mistake — taking obstacles in the wrong order, jumping the wrong jump, running past the correct jump, knocking down a jump bar, stopping forward motion before an obstacle, or missing just one of the weave poles — and he won't qualify, or "Q."

During the walk-thru, you want to memorize the course, identify areas your dog may be lured into making a mistake, and decide how to best guide him. To anyone who doesn't know what's going on, the walk-thru resembles a ring full of disturbed people talking to themselves and gesturing to invisible dogs while twirling and walking and running in random patterns.

The courses are designed so you have to switch from one side of your dog to the other as you run. You can do this by running in front of your dog and twirling in what's called a front cross; or you can run behind your dog in what's called a back cross. Every dog runs differently; some are fast and like to run ahead of their handler; they do better with back crosses. Others run beside or even behind their handler; they do better with front crosses. The best teams do both types.

I walk the course first from the dog's perspective, walking between the jumps and looking ahead to see what he sees. For example, after jump 5, he'll see jump 13 ahead of him, and unless I cue him in time, he could jump 13 instead of 6. I can tell that going from jump 7 to the weave poles will be a huge challenge. Pepe will be on my right, a little ahead, and if I don't cue him quickly or turn toward the right, he'll take jump 1. If I turn too much to the left, he'll miss the correct weave entrance, which is always with the first pole to his left. I practice aiming about a foot to the right of the weaves.