Home ›
Our Pet Experts ›
Dr. Patty Khuly ›
Rescuing vs. Hoarding: How Many Pets Is Too Many?

Rescuing vs. Hoarding: How Many Pets Is Too Many? 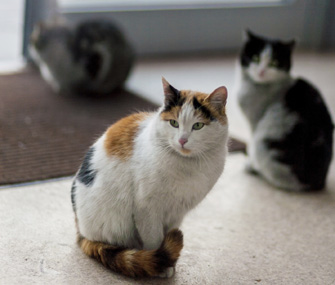 Thinkstock
How many pets are too many? Dr. Patty Khuly says determining if someone is a hoarder is not necessarily about the number.

Last month, one of our area’s local “rescuers” was charged for having about 50 Chihuahuas in her house. The place was not only filthy, but some of the rescued dogs had procreated. So much for the concept of a rescue facility, right?

Here’s the thing though: I do believe the person who ran this particular Chihuahua rescue really and truly meant well. Things somehow just got out of hand. Life happens, and next thing you know you’re knee-deep in Chihuahua poop and the TV trucks are lining up to film the next episode of Hoarders.

Over the years, I’ve seen it happen several times among good people I’ve valued as clients. Indeed, most veterinary professionals I know have witnessed firsthand how well-meaning pet-keeping can morph into full-blown hoarding. What’s more, some of us can even identify the seeds of this problem in our own pet-obsessed lives.

All of which brings me to the question in my title: How many pets are too many? When have you crossed that line from being a garden-variety pet lover and benevolent rescuer to an out-of-control animal accumulator?

It's the Care, Not the Number

Though you might assume there’s some set number of cats or dogs beyond which you’d clearly classify as a hoarder, the designation is not so simply achieved. For example, I knew one person with more than 30 cats who I wouldn’t call a hoarder (this was a very rare case involving an almost supernaturally wealthy woman who took impeccable care of her pets). But I’ve also known a man with only four pets whose living situation was such that “hoarding” became a reasonable description.

Which brings me to this explanation: Hoarding isn’t about a number. Rather, it’s about a compulsive need to acquire animals that reaches an overwhelming state, resulting in unintentional animal neglect or abuse.

Here are a few questions to ask yourself or someone you know who might be showing signs of being overwhelmed by their menagerie:

Assuming these questions are answered honestly, any responses in the negative may be an indication that the pet situation might be less than manageable. But not everyone has a clear perspective on his or her own life. That’s why I always encourage concerned friends to consider an intervention with a pet owner who may be in trouble, or I recommend that at-risk pet owners ask a cross section of their pet-loving friends to answer these questions for them. Thankfully, the vast majority of us are not at serious risk of becoming animal hoarders. Many of us, however, do know those who might be. Please do your best to speak openly and honestly to those people. Because if we don't, it’s not just the humans who’ll suffer.