Home ›
Our Pet Experts ›
Dr. Ann Hohenhaus ›
Seizures in Cats — Some of the Causes Might Surprise You

Seizures in Cats — Some of the Causes Might Surprise You 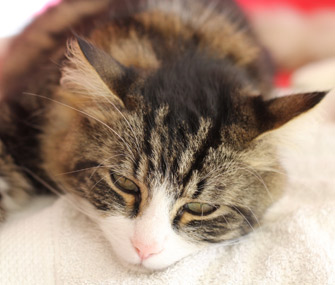 Thinkstock
Feline seizures can be scary, but they are often treatable.

Most veterinarians will agree that seizures can be a terrifying event for cat families to witness and no wonder: The definition of a seizure is a sudden, abnormal and disorganized discharge of electrical impulses from brain cells. Just reading that description is frightening. Cats experiencing a seizure may abruptly and violently thrash about, chomp their teeth, drool, lose consciousness and often urinate or defecate. What causes these traumatic events and what can you do if one occurs? Let’s take a quick look at some of the reasons why cats can have a seizure.

Since a seizure is characterized as a disorganized activity of brain cells, it is not surprising that a variety of brain disorders, as well as a hemorrhage in the brain, can cause one. Severe head trauma can also set up a seizure “focus” in the brain. A “focus” occurs when brain cells don’t work quite right and seizures result. For example, my sister adopted a kitten that was abandoned at my hospital after he suffered head injuries when he was accidentally stepped on. He recovered from the acute injury (getting stepped on) but developed seizures shortly afterward. Seizures may also result when infections, like those caused by the fungus Cryptococcus, take root in the brain. Other diseases, such as feline infectious peritonitis, which can cause lesions in the brain, and brain tumors (something I, as a veterinary oncologist, frequently see), are also on the list of feline brain disorders associated with seizures.

Sometimes, conditions outside the brain can affect its function and induce seizures. For example, untreated hypertension, most commonly from kidney disease, can result in seizures. The liver filters out many potentially seizure-causing compounds, such as dietary protein products that result after a typical meal. Young cats with a particular type of abnormal blood vessel that directs blood away from the liver (called a portosystemic shunt) can experience seizures because the shunt prevents these toxins from being filtered. Seizures can also result from exposure to toxins like antifreeze (ethylene glycol) or the application of flea and tick medications intended for use only on dogs and not cats. Accidental ingestion of certain human prescription medications, such as antidepressants and ADHD medications, can land many feline patients in the ICU with seizures.

Recently, researchers may have found another interesting possible cause of seizures in cats. In a recent issue of the Journal of Feline Medicine and Surgery, a group of British veterinarians reported on a new type of seizure syndrome termed “audiogenic reflex seizures” in which seizures are caused by a particular sound. In this study, seizures occurred in response to specific yet common everyday noises, such as the crinkling of aluminum foil, paper or plastic bags, the chinking of a metal spoon dropped into a food bowl and tapping on glass. Even the sound of ripping Velcro evoked a seizure in some cats!

Cats suffering from these seizures were typically older (more than 15 years). Many of the owners were surprised that noises could induce seizures in their kitties since they believed their cats were deaf! The authors of the study speculated that the cats experiencing the audiogenic seizures still had an ability to hear sounds in the feline ultrasonic range, which meant the cats could still hear high-pitched sounds like crinkling and clinking. However, the “deaf” cats had lost the ability to hear human voices and lower pitched sounds, causing their owners to assume their cats were deaf.