Training Your Dog? Why Rewards Work Better Than Punishment 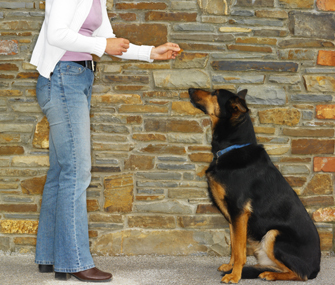 Reward-based training has been demonstrated to be effective both in the trenches with trainers and — more important — in the realm of science. Scientists Ivan Pavlov and B. F. Skinner made famous the benefit of using rewards and positive associations to change both behavior and emotion in an animal.

Pavlov found that, over time, animals make associations with certain stimuli that did not elicit a response originally. In Pavlov's famous dog experiment, the sound of a dinner bell could start a dog’s salivation response, because the dog had learned through previous experience to associate this cue with food. This approach is called classical conditioning.

Skinner's experiments explored ways to get animals to repeat or avoid behaviors depending on the consequence of that behavior; for example, he taught lab rats that pulling a lever resulted in a treat appearing in front of them. This approach is called operant conditioning. Classical conditioning and operant conditioning can be combined to train dogs with scientifically sound methods using rewards.

Classical conditioning affects behavior by changing the underlying stimulus associated with a natural response, while operant conditioning rewards a desired behavior, increasing the chances that the behavior will occur again in the future. These two approaches can both be used in a system of positive reinforcement. By pairing rewards and positive consequences with a stimulus, such as giving high-value treats to a dog every time he sees another dog he was once unsure of, a trainer can change the dog's response from fear or aggression to joyful anticipation each time he sees that particular dog. This change in stimulus then causes the desired behavior change in the dog — say, from barking at the other dog to sitting peacefully at his owner's side.

Why Punishment Is More of a Problem Than a Solution

Science shows that in order to effectively change behavior, there has to be some motivation for the change. Punishment is often a motivator of choice for more traditional trainers. Unfortunately, using punishment most often only rewards the punisher, because it’s an outlet for frustration. Punishment can quickly get out of hand — there is a fine line between punishment and abuse.

Punishment will not change your pet's behavior in the desired way. Often the animal doesn’t understand what he is being punished for, and will associate other things with the punishment than what is intended. This can hinder the bond between pet and person, as the owner is perceived by the dog as someone who is “unsafe.” As a result, the dog will be intimidated by and afraid of the owner.

When dogs are punished, they also begin to associate certain situations with something they dislike; in this situation, a dog may show increased aggression. This can be seen in dogs who are jerked on their prong collar when they strain towards another dog on a walk; eventually, the dog begins to escalate his reaction to barking and lunging when he sees another dog, because the sight of another dog means he is going to be punished.

Dogs that are punished may temporarily inhibit their behavior in order to avoid punishment, but they don’t learn a better behavior to take the unwanted behavior’s place. In the long run, either the old behavior comes back again later or other unwanted behaviors take its place. In order to change a dog's behavior using the punishment model, the punishment needs to increases in intensity with time, because dogs grow desensitized to it. Dogs who have been trained using punishment methods have also been shown to have increased aggression and a higher tendency to bite, which can make them a danger to children or unfamiliar adults.

Why Positive Reinforcement Is Preferable

Punishment is not a method that can be used by the entire family; it carries great risk for both the family and the pet. Positive reinforcement training, on the other hand, is something the entire family can be involved in, from young children to the elderly. Using rewards doesn’t require the use of force; it simply requires creativity. Choose the behavior you want to reinforce and the unwanted behavior you want it to replace, such as getting your dog to lie on a mat instead of begging at the table, and use rewards to get your dog to display the acceptable behavior. This will increase the chances of the desirable behavior recurring, while the unwanted behavior stops.

With reward-based training, you will replace the fear and inhibition taught with punishment training to a demeanor of confidence and joy. Reward-based training is scientifically sound for lasting behavior change and provides a common language between pet and person that deepens the human-animal bond.