Home ›
Our Pet Experts ›
Amy Sinatra Ayres ›
Where Are They Now? Vetstreet Checks in With Some of Our Favorites

Where Are They Now? Vetstreet Checks in With Some of Our Favorites

Among the stories that have touched us mostover the yearsat vetstreet.com have been those that showed the amazing bondbetween kids and animals. So for the site’s fifth birthday, we wanted to get an update on how some of the folks in those stories have been doing.

We decided to check in on two kids and the service dogs who have helped them, as well as Tara, the hero cat who saved her family’s little boy from an attack by a neighbor’s dog. 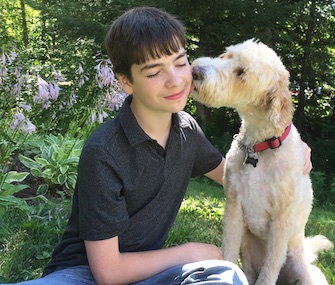 Courtesy of Lisa Moss
Evan Moss gets a sweet kiss from his service dog and best friend, Mindy.

When we first told you about Evan Moss in 2011, he was 7 years old and had written a book called My Seizure Dog to raise money for the service dog he needed. Evan lives with a rare disease called tuberous sclerosis complex (TSC), which causes tumors to grow in vital organs and has also resulted in a lifetime of seizures for Evan.

In 2012, Evan brought home Mindy, a Goldendoodle who alerts his parents when he has seizures so they can quickly administer his medication. She also calms his anxieties during hospital stays, blood draws and medical procedures.

Today, Evan and Mindy are “pretty much inseparable,” Evan’s mom, Lisa,says. “She goes to school on the bus withEvan, and he gives her the window seat so she can enjoy the view.” This fall, they’ll be starting a new adventure together, as they head to middle school. “We anticipate lots of excitement and changes as they adjust to the new school,” Lisa says.

And Evan hasn’t stopped writing. He wrote a second book, My Life with TSC, to raise awareness about the disease. A portion of the proceeds goes to the TS Alliance, a nonprofit that works to find a cure for TSC while improving the lives of those affected by it.

“Evan says he can't imagine life without Mindy and still says she's his best friend,” Lisa says. “I think he walks a little taller having her by his side.”

Two years ago, Tara made headlines when a surveillance video caught her racing to the rescue when a neighbor’s dog escaped from his gated driveway and attacked her family’s 4-old-old, Jeremy Triantafilo, who is autistic.

In the footage, Tara can be seen running at the dog and chasing it away. The video went viral, earning her the nickname Tara the Hero Cat.

The following year, Tara was recognized for her bravery and quick action with a special award from a Los Angeles animal shelter — its annual Hero Dog Award. The word “dog” was scratched out on the trophy and replaced with “cat.”

“Every chance we have to show how much we appreciate her, she is loved on. She is very happy in our home,” the family told us in a follow-up story in December 2014.

The two still share a special bond. The Triantafilo family could not be reached for comment, but last month, the family posted a photo on Facebook of Tara lying next to a sleeping Jeremy with the caption, “It's a cat/boy love thing.Forever and always! #HeroCat #MyBoy”