Home ›
Our Pet Experts ›
Linda Fiorella ›
Why Does My Cat... Chase Me? 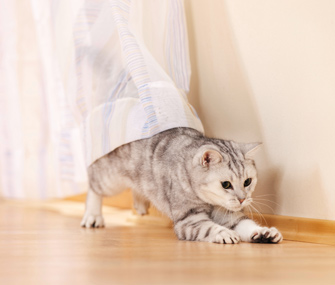 Cats chase. It’s what they do. Being born predators, they normally go after small prey or toys that mimic prey or maybe each other for fun and practice. But why would a cat chase a human?

“I’ve had a lot of owners come in with wounds from their cats playing with them inappropriately,” says Sharon Crowell-Davis, DVM, DACVB, professor at the College of Veterinary Medicine at the University of Georgia. “We sometimes encounter a behavioral problem in cats when they’re confined to a house and don’t have adequate or appropriate opportunities for play," says Dr.Crowell-Davis. "They discover the game of chasing the human and pretend that a leg is a mouse or other prey and jump on it and try to ‘kill’ it.”

When Play Is Fun

What if your cat doesn’t pounce for the kill but just occasionally gives chase when you, say, carry the dishes into the kitchen? “If your cat simply chases you and stops short, she has discovered a very functional form of play,” says Dr. Crowell-Davis. “It’s an inhibited and modified form of hunting behavior. So when she’s in that mood, that would be a good time to grab a ball and toss it and roll it since she is wanting the stimulation.” The same applies to stalking too, as long as it remains play behavior and doesn't end with an attack. “If you have a cat who tends to follow you around the house — walking, stalking or chasing — then you’ve got a cat who is fairly attached to you socially and wants to be near you because of that social attachment.”

Dr.Crowell-Davis also notes that cats like to play tag. “At my home I have a large fenced outside area for my cats, and I frequently see them playing tag,” she says. “Sometimes when my daughter is in the backyard, she’ll engage in that game of cat tag. Everybody runs around and jumps and takes turns chasing each other.” Dr. Crowell-Davis admits that the rules of cat tag are not identical to human tag, but the results are the same: fun! “Especially when four or five of my younger and more energetic cats start playing,” says Dr. Crowell-Davis. “One cat will charge another, and then another cat will jump into the air, and the one that jumped first will run away, and the one that jumped next will run after it...that is a normal form of feline behavior.”

If your kitty’s stalking or chasing does conclude with an attack, Dr. Crowell-Davis says it’s important to realize that it is normal for cats to stalk and run and attack something — the key is that we don’t want them to attack us. “You need to look at whether your cat has adequate opportunities for acceptable types of play and realize that just bringing home a fabric mouse stuffed with catnip isn't going to cut it,” says Dr. Crowell-Davis. Your cat may be interested in it for a while, she says, but then that mouse just lies there on the floor.

“Cats need activity, something that stimulates them to move and go after things,” Dr. Crowell-Davis says. She notes that you can buy mechanical or puzzle toys, or even make some yourself as easily as getting some elastic and tying one end to a door frame and tying a piece of fabric to the other end that dangles within reach or your kitty. “You can kind of jiggle the thing, and once the cat goes for it, her own actions in grabbing and releasing the fabric will make it bounce all over the place,” she says. Ideally, a homemade toy like this should only be used under supervision, so you can make sure the cat doesn't ingest the elastic or fabric.