Why Does My Cat... Chatter at Birds? 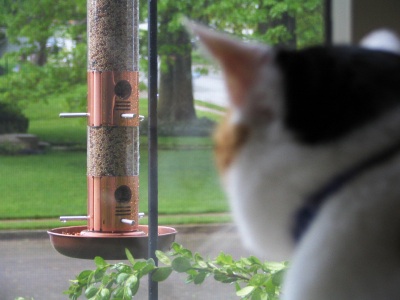 Ever wonder why your kitty makes an odd clacking sound while staring longingly at a bird who's just beyond her reach? You’re not alone — plenty of veterinarians and feline behaviorists are also intrigued by this curious cat behavior.

The rapid-fire movement of the feline jaw that happens when a cat stalks its prey may be similar to a Pavlovian instinct witnessed in dogs who salivate come mealtime.

But the truth is that we’re not quite sure exactly why cats chatter at potential prey. After all, felines tend to be stealth, soundless hunters who'd certainly tip off prey with this behavior in the wild — which is why some behaviorists speculate that house cats are simply displaying pent-up frustration when faced with prey they can't attack.