Home ›
Our Pet Experts ›
Linda Fiorella ›
Why Does My Cat... Crave Tuna Fish?

Why Does My Cat... Crave Tuna Fish? 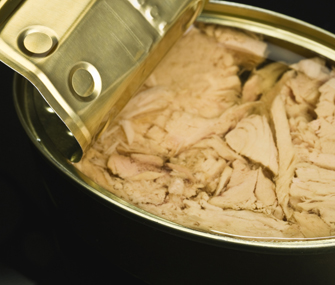 It takes a stoic cat to resist the fishy allure of tuna — and most kitties aren’t up to the task.

But what makes tuna so irresistible to felines in the first place?

According to Dr. Richard L. Doty, Ph.D., director of the Smell and Taste Center at the Perelman School of Medicine at the University of Pennsylvania in Philadelphia, the reason why many cats respond so favorably to tuna fish is unknown. Dr. Doty points out that although cats lack taste receptors for bitter- or sweet-tasting agents, whether or not this plays a role in their fondness for fish has not been determined.

A Craving With a Health Caveat

Dr. Victoria L. Voith, DVM, Ph.D., a professor at the College of Veterinary Medicine at the Western University of Health Sciences in Pomona, Calif., warns that, regardless of the reason for why cats desire tuna, owners need to resist giving in to their kitty's cravings too often.

“Eating lots of tuna imparts a strong, unpleasant odor in the urine,” says Dr. Voith. “Your cat could also ingest toxic amounts of mercury concentrated in the fish.”

Dr. Doty agrees, noting one study that found that cats who were fed too much canned tuna cat food had health issues. In addition to elevated levels of mercury and selenium in their bodies, the felines who were fed tuna fish cat food played and vocalized less than those who ate beef-based cat food.

If you can’t resist your cat’s plaintive cries whenever you open a can of tuna, keep in mind that health problems can arise when a feline is fed too much tuna — but Dr. Voith and Dr. Doty both agree that, barring any fish allergies, the occasional tuna treat is fine.