Home ›
Our Pet Experts ›
Linda Fiorella ›
Why Does My Cat... Love Laser Pointers?

Why Does My Cat... Love Laser Pointers? 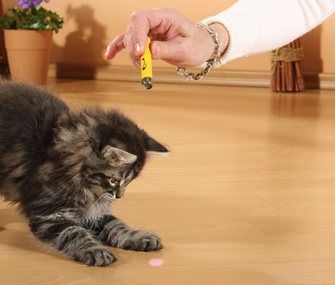 The scene plays itself out in homes across the country: Kitties playfully paw at walls and pounce on furniture in frantic pursuit of a tiny, glowing dot of laser light.

What is it about laser pointers that cats find so irresistible — and are they safe?

What's so special about laser pointers?

Laser light dots move with varied speeds and rapidly change direction, mimicking the actions of the kind of small prey that felines would normally chase and kill for food.

According to Dr. Gary Landsberg, BSc, DVM, Dipl ACVB, DECAWBM, a veterinary behaviorist at North Toronto Animal Clinic in Thornhill, Ontario, a typical cat will engage in at least eight to 10 sessions of chasing and killing small prey each day (more if the meal escapes!), and this behavior remains innate even in indoor felines who have no need to hunt.

But the average house cat has limited opportunities to “stalk, chase, pounce and bite,” Dr. Landsberg says. So laser pointers supply an attractive substitute target for many kitties.

Are laser chases good for my cat?

When felines are denied the opportunity to tap into natural hunting instincts, they may engage in “unruly and destructive behaviors, such asuncontrolled bouts of chewing,climbing and exploring,” Dr. Landsberg says, adding that even stress-induced behaviors, such as over-grooming or urine marking, can result, as well as increased obesity.

“Laser play can be a productive way to offer short bursts of chase and play for some cats, while keeping the target away from owner hands and other body parts,” Dr. Landsberg says.

Although, he warns that some felines may develop problems when they can't effectively "catch" the laser dot. Whether because of frustration or hyper-arousal, some cats may try to catch and bite something tangible, such as owners, other pets and household objects — or even start to chase light filtering through window blinds.

To prevent this behavior, Dr. Landsberg suggests interspersing toys that kitties can readily grab and sink their teeth into or “provide a food-filled toy to end hunting sessions with a reward.”

When in doubt, avoid shining any light into your pet's eyes — even if permanent damage is unlikely, a bright light shone directly at the eyes is uncomfortable. That said, laser pointers sold for use as cat toys should be safe, even if they're accidentally shone briefly into a human or feline eye. Not all laser pointers are up to code, however, so look for models with labels indicating that they're safe for pets.

Dr. Landsberg also cautions owners to watch where they move the pointer, since cats may be so intent on the chase that they don't notice where they arerunning.

Ultimately, Dr. Landsberg recommends finding a few differenttoys that your kitty enjoys chasing, and work in a few play sessions with these toys each day: “This better helps to meet a cat's need for chase, play, pounce and bite — and provides positive social time with the owner, as well as physical exercise.”