Home ›
Our Pet Experts ›
Dr. Wailani Sung ›
Why Does My Cat… Rub His Face on Everything?

Why Does My Cat… Rub His Face on Everything? 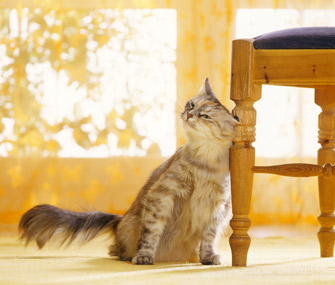 Alamy
When your cat rubs his face on an item like a chair, wall or coffee table, he leaves his scent behind.

Cats rub their faces on things for many reasons, depending on the context or object being rubbed.

Cats have multiple scent glands on their heads. They have glands located around their mouths, chins, sides of the face, neck and ears. When a cat rubs his face on an item, he leaves his scent behind. The act of a cat rubbing his head on objects is called “bunting.” The height of the object determines which part of his head a cat will use to leave a scent mark on an item. Cats also tend to choose conspicuous objects, such as a corner that sticks out, whether a wall, the edge of a coffee table or sofa, or even the corner of a book or box. Male cats tend to bunt on more items than female cats. Cats also tend to bunt over the scent marks left by other cats.

Cats sometimes bunt to inform other cats of their presence in the vicinity. Bunting may also be a form of “time stamping,” meaning that other cats may be able to determine by the age of the marking how recently another cat was there. If the mark is relatively fresh, they may want to leave the area soon to avoid conflict. Some cats bunt when they are anxious. Spreading their scent around may be a way of coping or making themselves feel more comfortable in an unfamiliar environment.

Rubbing on objects may also be a way to pick up scent. When cats bunt on their owners, they not only deposit their scents but also pick up scents from the owner. This can also be a sign of affection or greeting behavior. Cats who live in social groups often rub on each other in greeting.

And rubbing on objects is one way sexually intact cats provide visual cues to other cats during mating season. Males are more interested in female bunt marks during the mating season, which indicates the female’s scent changes to entice male interest.

Read more articles by Dr. Sung:
Why Does My Cat... Steal Things?