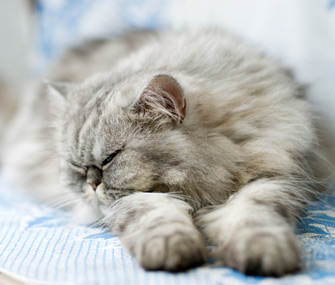 Thinkstock
Flat-faced cats like Persians and Himalayans are more likely to be snorers.

Who can resist YouTube videos of kittens snoring? It may not be so cute, however, when it’s 4 a.m. and your cat sounds like a ripsaw on the pillow next to you.

Snoring in cats, while not as common as in dogs, is usually caused by some kind of partial obstruction in the upper airway. The low-pitched sound, called stertor, usually results from soft tissue or fluid interfering with the smooth passage of air through the nose or throat.

As in people, it may be just positional and relatively harmless, but in some cases, snoring may indicate a medical problem.

Are Some Cats Predisposed to Snoring?

Like their smooshy-nosed canine counterparts, flat-faced cat breeds such as Persians and Himalayans are often predisposed to brachycephalic airway syndrome. In other words, that adorable facial conformation usually doesn’t come without some kind of respiratory compromise.

That means their nostrils may be narrower than usual, or their soft palates extend a little too far, to name just a few of the potential problems. While this may make for nothing more than some nocturnal snuffling, in severe cases, surgery may be necessary to help your cat breathe easier.

Of course, obesity in cats can also exacerbate any existing respiratory problems, so there’s another reason to keep your kitty on the lean side.


When Should You Seek Help?

If the snoring isn’t posing a real problem for your cat, nothing more needs to be done. But, if your cat is having difficulty breathing and is trying to compensate through open-mouth breathing or extending his head and neck straight out, get to your veterinarian as soon as possible.

Other signs that something may be amiss include nasal discharge (from one or both nostrils), facial swelling, sneezing, coughing or a change in voice.

Typically, your veterinarian will perform a thorough physical examination and recommend X-rays to try to localize the problem. If your cat is stable, your veterinarian may also suggest sedation or anesthesia to examine the nose and throat more closely.

In addition to brachycephalic airway syndrome, other possible causes of snoring include:

How Is Snoring in Cats Treated?


The treatment will depend on the underlying cause. Thankfully, in most cases, snoring in cats is relatively harmless and may require nothing more than an investment in a nice pair of earplugs — for you.