Home ›
Our Pet Experts ›
Colleen Oakley ›
Why Does My Dog... Pick Fights With Pups Twice His Size?

Why Does My Dog... Pick Fights With Pups Twice His Size? 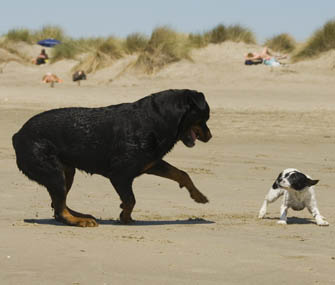 You’re out for a pleasant walk with your Chihuahua, and the next thing you know, he’s pulling on his leash — teeth bared — and trying to attack the German Shepherd Dog from down the street.

It’s a common trait among small dogs, but it often plays out as if they had a death wish. So why do they do it?

Why Some Small Dogs Tend to Antagonize Big Dogs

In this case, offense is the best defense — or so they think, says Dr. Sophia Yin, DVM, an animal behaviorist and the author of How to Behave So Your Dog Behaves. “Small dogs typically find big dogs scarier," she adds. "They’re afraid of being trampled or pushed around. And when they’re afraid, their instinct is to become aggressive.”

It doesn’t help that some smaller breeds, like terriers, also have a propensity to be highly reactive by nature — they have less impulse control, a higher arousal level and tend to overreact when scared, notes Dr. Yin.

Regardless of the size of your dog, that aggressive nature can be contained — and even avoided.

How Proper Socialization Can Help

“Owners should enroll their dogs in puppy classes by eight weeks,” says Dr. Yin, stressing how vital it is to properly socialize your pup before he reaches adulthood. “They need to learn how to play with other puppies in a controlled environment — and be called away when things start to get too rough or exciting.”

And even if your dog is long past the puppy stage, it’s never too late to start socializing your dog. “Try to introduce him to two or three well-behaved dogs a week,” she says.