Home ›
Our Pet Experts ›
Linda Fiorella ›
Why Does My Dog... Tilt Her Head? 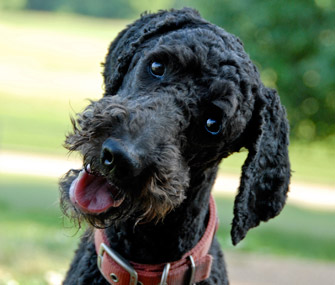 It’s a classic dog move: Your pup hears something — a mysterious sound, a smartphone ring, a certain tone of voice — and suddenly her head tilts to one side as if she is contemplating what the sound wants from her. Internet videos of the behavior attest to its commonality — and to the fact that so many dog lovers find it so entertaining. Once you realize how your dog reacts to, for example, a question — “Who’s the best girl?” — it's hard to resist repeating it over and over, just to see your already-adorable dog up the cute factor by cocking her head to the side. It's like she's puzzling out the precise meaning of your words.

Or is she? What’s really happening when your dog tilts her head?

The Better to Hear You With

The head tilt, although not fully understood, might actually signify your dog’s attempt to make sense of what she hears. Dr. Meredith Stepita, a diplomate of the American College of Veterinary Behaviorists now practicing at East Bay Veterinary Specialists in Walnut Creek, Calif., explains that some experts believe that dogs tilt their heads when they think there is a possibility that what is being said could lead to something important to the dog — an activity they enjoy, for example. Since dogs can understand some human language, including words and tone of voice, a head-cocking dog could be concentrating on picking out a key word or inflection that relates to that favorite activity. So your dog may tilt her head when you start talking about taking her for a walk or giving her a bath or playing a game of fetch — whatever it is that she loves to do.

Dr. Stepita notes that the way dogs hear plays a part as well. Dogs have movable earflaps that help them locate the source of a sound. In addition to moving their ears, says Dr. Stepita, dogs' brains “compute extremely small time differences between the sound reaching each ear. Even the slightest change in the dog’s head position relative to the sound supplies information the dog’s brain uses to figure out the distance of the sound.” So, when a dog tilts her head, she could be trying to more accurately determine the exact location of a sound, specifically the height relative to the ears, adds Dr. Stepita.

Put these elements together and it seems pretty likely that dogs naturally engage in this behavior and then repeat it when reinforced. “If the dog is praised by the owner for cocking her head, she will be more likely to tilt her head in the future,” says Dr. Stepita.

Is Head-Tilting a Sign of Intelligence? Or Something Else?

So is your head-tilting dog smarter than her canine peers? Although there are anecdotal reports of dogs with long, floppy ears being more likely to tilt their heads in response to noises than dogs with erect ears, Dr. Stepita knows of no studies that associate the head tilt with any specific classification of dog like breed, age or intelligence. She also notes that some experts have reported that dogs with certain socialization problems are less likely to engage in the head tilt when people speak.

While it’s easy to assume something as cute as your dog tilting her head at you is always benign, it is important to speak with your veterinarian about any behavior that could have a medical cause, including a head tilt. “A dog that consistently or even intermittently holds their head to the side, especially without an obvious external trigger present (i.e., a noise), may have a medical problem,” says Dr. Stepita, These types of health issues range from brain disease such as infection, inflammation, cancer, etc, to an ear problem such as infection, lodged foreign object or other mass. Only a veterinarian can rule these out.