Home ›
Our Pet Experts ›
Why Exercise Is Important for Cats

Why Exercise Is Important for Cats 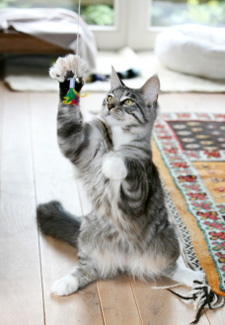 Cats are notorious for their appreciation of the finer lounging places in life, but despite their reputation for snoozing, they also enjoy the opportunity to stretch their legs and get some exercise on a daily basis. Fortunately for cat owners who take after their cats, exercising a cat doesn't take much time or energy. It's estimated that between 25 and 40 percent of cats seen by veterinarians in the United States are overweight, with many being obese. A cat that is overweight may not be able to jump to his favorite spots and can't play as much as he might like. Obesity is also associated with several medical problems, including increased chance of arthritis, ligament damage, diabetes mellitus, breathing difficulties, liver problems, surgical risk and urinary tract disease.

Although reducing food intake (ask your vet about the safest way to do this) is the number-one way to combat obesity, increasing exercise is also helpful and should be part of every cat's daily routine. As predators, cats naturally sleep a lot, but they also have bursts of activity. They're sprinters, not marathon runners. This means you don't have to buy your cat a treadmill or take him hiking and swimming. But you still can't ignore his basic need to exert himself a few times a day.

Get Your Cat Moving

Cats that have access to the outdoors are more likely to stay fit by hunting, climbing and investigating, but the dangers inherent in allowing cats to roam offset those advantages in most situations. If your cat lives indoors, you need to take on the role of coach in encouraging him to get moving. An assistant coach, in the form of another cat, is one of the easiest ways to get your cat playing and moving. But you can also encourage movement by providing a cat tree and a variety of climbing and perching posts, as well as scratching posts.

You can place food treats (or even a small meal of dry kibble) in interactive toys that require the cat to roll and manipulate them to get the food, you can hide the food around the house (remember where you put it!), or you can throw it piece by piece for your cat to run after. Interactive toys such as feather wands, kitty "fishing poles" and laser light pointers can provide even more exercise. Several toys are available that allow your cat to play by himself when you're away.