Home ›
Our Pet Experts ›
Dr. Patty Khuly ›
Why You Want Your Vet To Perform a Rectal Exam on Your Pet 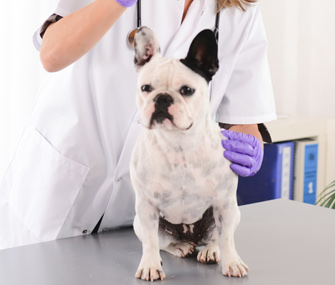 Really? you say? A rectal exam? Growing older is bad enough without the discomfort and indignity of a routine digital rectal examination. So why would you want to subject your pet to such a thing?

I’ve got a few reasons. But first, a quip.

I had a professor in vet school who would say the funniest things about important stuff so his students would never forget it. For example, on the subject of rectal exams he offered this riddle:

Q: What’s the only reason not to perform a rectal exam?

A: No rectum… or no fingers.

Those are two reasons. And with apologies to my professor, I’ll add another couple to the list:

1. Because some dogs are too tiny. (Think teacup Poodle or a young pup of any breed.)

2. For cats, there’s a limited amount of information to be gleaned from rectal examinations unless they’re specifically indicated in certain diagnoses. The most common of these include ensuring that a pelvic fracture isn’t compromising the rectum or when digital evacuation of feces is required (in the case of constipation). But I would typically anesthetize a cat before undertaking the uncomfortable probe.

Getting Over the "Ewwww" Factor

Without a doubt, even the notion of this kind of exam is enough to gross most people out. So much so that you might hope and pray your vet never goes there in your presence. Nonetheless, I’m here to assure you that routine probing of your dog’s digestive nether parts is something you reallydo want yourveterinarianto do.

In fact, reasonable limitations notwithstanding, one could argue that a physical examination of a dog is incomplete without it. At least, that’s what most of us were taught during the course of our veterinary education.

Despite this vet school drumbeat, the truth is that most veterinarians don’t do rectal exams—not unless we’ve got a good reason to suspect your pet’s current medical condition has something to do with the reachable parts of the digestive tract and reproductive organs (among other nearby structures).

Why the reticence? From the informal surveys I’ve conducted among other veterinarians, the main reason they don’t do this part of the physical exam is to spare pet owners who may be uncomfortable witnessing it.

I get that. I really do. I’m sensitive to the facts that most owners don’t want to feel that their pets are being "violated" in such an uncomfortable fashion and that they feel more than a little bit awkward about attending such an event."Do what you have to do, but I don't want to know about it," they probably think. And how could I blame them?

Still, I consider the rectal exam an essential component of any complete physical examination. This is especially true for the intact male dog. Cats and female dogs get a pass unless very specific information is being sought. But boy dogs with testicles? No doubt about it. They need to get digitized. There’s too big a risk that an unneutered dog is experiencing prostate troubles (common in intact males).

I can't help but feel a bit sheepish at times when I’ve got to perform a rectal on a patient in the exam room (which happens often). Though I’m mostly in matter-of-fact doctor mode, in certain instances I’ll confess that I’m not above bashfulness when it comes to the cultural inhibitions we all share.