Home ›
Our Pet Experts ›
Your Dog: Why Exercise Is Important

Your Dog: Why Exercise Is Important 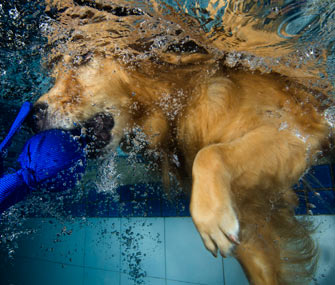 Exercise is not only beneficial to you, but your pet as well.

Living with a dog has many perks, but one of the best has to be the impetus to get off the couch and out the door so you can both get some exercise. Exercise is as important for your dog as it is for you!

Exercise isn't just a nicety; it's a necessity for maintaining optimal physical and mental well-being. As with people, obesity is becoming a major health problem in today's dogs. Between 20 and 40 percent of all dogs seen by veterinarians in the United States are considered overweight, and many are clinically obese. Obesity prevents dogs from enjoying many physical activities; it also decreases speed and stamina and makes it more difficult for dogs to deal with heat. Obesity is also associated with certain medical problems, including arthritic changes in overly burdened joints, increased risk of torn ligaments, back problems, cardiac problems, difficulty breathing, increased surgical risks, skin problems, whelping problems and a possible increase in risk for some cancers.

If the physical threats associated with obesity aren't enough, consider the behavioral aspects of a lack of exercise. Dogs are active by nature. Their ancestors, wolves, covered many miles every day in search of food. Many domestic dogs were selectively bred to be even more active, with a focus on hunting or herding or patrolling. Preventing them from their genetically programmed activity level can build frustration, which may exhibit itself in the form of hyperactivity, barking, digging, tail chasing, and home destruction. Boredom has also been associated with behavioral problems in some dogs.

Don't think you can just stick your dog in the yard and trust him to exercise himself. Unless he has a friend in the yard with him, or lots of stimulation on the other side of the fence (in which case he's probably barking too much to be a good neighbor), he may chase his tail a few times, sniff around, and then just sit there. You'll need to play coach to get him in shape.

Before starting any new exercise program with your dog, have a chat with your veterinarian. You'll want to make sure your dog is healthy enough to safely increase his physical activity. This is especially true for mature dogs, but even young dogs should get a go-ahead from a vet.

So what kind of exercise is advisable? It depends on your dog's age, breed and individual needs. Puppies need short spurts of exercise. They should never be pushed to exercise beyond their limits; for example, don't take your puppy jogging or jumping until he's finished growing, but do let him run, walk and play at his own speed. With an adult, work up to longer walks or runs gradually. You can't turn a couch potato into an athlete overnight, so be content playing tortoise for a while if necessary. It's better (and less dangerous) to exercise at a slow, steady pace every day than it is to try to burn off everything on the weekends with crazed running.

If you're walking or jogging, be sure to avoid hot pavement and check your dog's paws for abrasions. If your dog is lagging behind, panting excessively, breathing heavily or having trouble keeping up with you, stop! Offer a little water if you have some, and plan to reduce the duration and intensity of your next session until you're working at a pace your dog can safely maintain. Don't exercise in the heat of day; your dog can't cool like you can. You can purchase special attachments for running your dog next to your bicycle, and you can even buy treadmills designed especially for dogs.

Swimming is a great exercise, but never send your dog into rough or fast-running water, especially if he's already tired. And don't assume that all dogs can swim well. A life jacket is a good idea, even for seasoned canine swimmers.