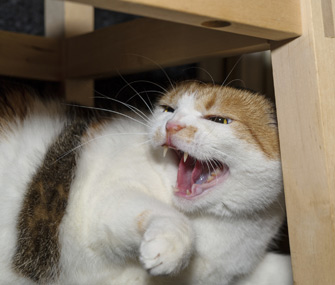 The cause of nonrecognition aggression is not entirely clear, but if a cat threatens his onetime friend after being separated from him for a time, he may be confused by the other cat’s smell. When dealing with cats who harbor these aggressive impulses, it’s always best to reintroduce the returning partner slowly, as if they’d never met.

Nonrecognition aggression occurs when one cat is uncharacteristically aggressive toward a companion cat after a period of separation. For example, after one cat returns home from a veterinary visit, the cat that stayed home is aggressive toward the returning cat, who may flee, freeze (hold still), or fight back.

The cause of this type of aggression is not fully understood. Possible causes include:

Aggression generally refers to threats or attacks, but that’s not always easy to see when it comes to intercat issues in general. Aggressive acts among cats can include hissing, growling, swatting, chasing, and biting — or it can come down to subtle incidents of intimidation unrecognized by owners as aggression.

Here are some rules for the two kinds of cats in a nonrecognition scenario.

Signs of an Attacking Cat (Left Behind):

Signs of a Defensive Cat (Returning to the Household):

All breeds of cats seem equally disposed to this kind of intercat behavior.

Here are some recommendations if you are faced with this problem:

It’s recommended that owners reintroduce two cats only when the aggressor has completely calmed down and is back to normal. It may help to reintroduce cats gradually through a screen, gate, or cracked door before allowing them full access to each other. Place cats’ food bowls on opposite sides of the barrier to encourage them to be close together while doing something they enjoy. Once both cats appear relaxed, open the barrier between them little by little. If the cats remain relaxed, they may be ready to be together again. If they show signs of aggression (e.g., growling, spitting, hissing, swatting), separate them again and restart the process of gradual reintroduction.
Two cats are likely to reestablish a relationship or at least tolerate each other, but future episodes of nonrecognition aggression are likely.

Any change in a cat’s behavior could also be a sign of a medical condition. If either cat’s behavior in such situations does not improve, further veterinary care is warranted. Contacting a certified applied animal behaviorist (CAAB or ACAAB after the last name) or a board-certified veterinary behaviorist (DACVB after the last name) is recommended if no biological cause of illness is identified.

To help prevent nonrecognition aggression, take the following measures after bringing a cat home from your veterinarian’s office and before reintroducing him or her to your other cat(s).


This article has been reviewed by a Veterinarian.

Find out which pets are your best… ›
READ MORE: Cats, Cat Behavior Issues