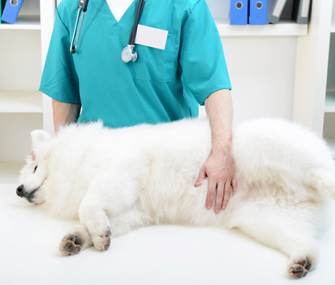 The cause of pregnancy is well known. The symptoms are a big belly and particularly towards the end of gestation, swollen mammary glands. The treatment is a healthy diet, moderate exercise, and a few routine tests for the mother.

As you might expect, pregnancy is defined as the time between conception and birth during which fetal puppies develop inside the mother’s (or “bitch’s”) uterus. Unlike feline fertility, canine fertility is not influenced by diurnal rhythms (exposure to sunlight). As a result, pregnancy in dogs tends to be nonseasonal.

Developing pups usually have claws, eyes, and ears by day 40 of gestation. Full body hair develops by the eighth week. Typically, the litter is born at 63 days, but 56- to 70-day gestations have been reported. Litter size can range from a single pup to as many as 10 or more.

While toy breeds tend to have smaller litters of one to four puppies, larger breeds may carry as many as eight to 12 puppies. Inbreeding can lead to smaller litters and stillborn puppies.

During the first few weeks of a dog’s pregnancy, there are very few signs. By the last three weeks, however, weight gain around the abdomen and mammary gland growth become evident. Toward the end of pregnancy, the mammary glands enlarge, and a milky discharge from the nipples a day or two before birth is common.

A pregnant dog may shred bedding and papers to create a nest. She may also become irritable and seek privacy. Restlessness and panting may occur during the last day or two of gestation.

A blood test to detect the presence of relaxin, a canine reproductive hormone, can indicate conception as early as 20-26 days after mating. However, the test results may remain positive even after a bitch has lost or resorbed a litter. Some veterinarians can identify pregnancy by palpating the abdomen with their hands as early as the third to fourth week of pregnancy. Ultrasonography, if available, may be used to identify fetal heartbeats around the third week of pregnancy. During the sixth week (starting at 45 days), radiographs (x-rays) can detect bones and give the most accurate estimate of litter size.

Hormones may cause some female dogs to show signs of pregnancy even when no mating has occurred. These signs include changes in appetite, weight gain, nesting, mothering inanimate objects, and even milk production and labor. Usually, signs of a false pregnancy resolve within three weeks, but may be recurring.

As most readers might well have deduced, there is no breed predisposition for pregnancy.

Pregnant dogs should be fed a well-balanced commercial diet and should have access to fresh water at all times. As the pregnancy progresses, a veterinarian can counsel the dog’s owner on increasing food intake or other dietary needs. Nutritional supplements should not be offered without veterinary consultation, as some can be harmful to the fetuses. Most heartworm products are approved for use in pregnant dogs, but vaccines should generally be avoided during pregnancy. Consult your veterinarian before giving any medications or flea and tick products.

As developing puppies take up more space in the abdomen and press against the stomach, feeding bitches smaller, more frequent meals might be advisable. Further, dogs often require even more food during nursing. In fact, they can consume up to twice as much food as normal during this period.

A moderate amount of exercise during the first four to six weeks of pregnancy can help the mother maintain muscle tone, which is important for the birthing process. However, care should be taken not to overexert the dog during the final weeks, when her abdomen and mammary glands are enlarged.

Spaying and neutering dogs is 100 percent effective against pregnancy.

Find out which pets are your best… ›
READ MORE: Dogs, Reproductive Health