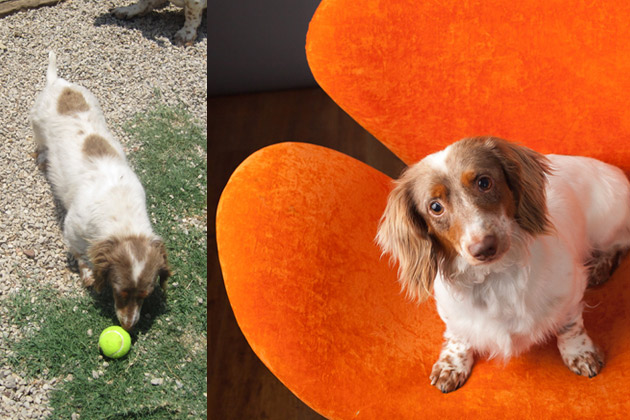 photography: teresaberg.com
The image on the left was the original photo the rescue group used to showcase Franklin's charm to potential parents online. The shot on the right, by photographer Teresa Berg, really lets this Dachshund shine.

October is Adopt-a-Shelter-Dog Month, and no one knows the joys of welcoming a four-legged companion into your home better than Kathleen Coleman. Since 2005, she’s been the rescue coordinator for the Dallas-Fort Worth Dachshund Rescue Foundation, an organization where she found her four beloved hounds — Lacy, Nicolas, Winston, and Toby, a dog agility sportsman.

Coleman is also the woman behind a clever program (recently featured on CBS Sunday Morning) that has helped double the organization’s adoption numbers. All it took was a professional photographer with a big heart — and some fabulous doggie accessories in the form of baubles and smart bow ties.

It started when Teresa Berg adopted a dog from the organization and the Dallas-based photographer expressed a pet peeve she had with the standard-fare furry mug shots you typically see on pet adoption sites like Petfinder. Altough the rescues are often doing the best they can, Berg found the photos, in a word, depressing. 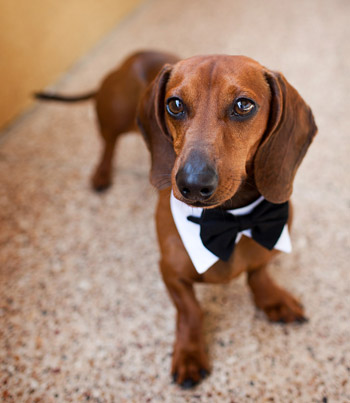 photography: teresaberg.com
The dashing Cameron now lives with a family of Dachshund lovers.

So the duo set up a photo shoot to capture the true personality — not to mention spunk — of each dog under Coleman's care who was in need of a forever home. The result: Glam portraits that were so fetching the organization now compiles them into an annual calendar, which sells out almost as quickly as the pin-up pups get adopted.

The program has been so successful, in fact, that Berg offers pro bono seminars for other rescue organizations on the fine art of capturing the perfect adoption portrait. Aside from covering technical tips, Berg and Coleman have also learned a thing or two about how best to appease their notoriously stubborn models. “Some helpful tools for a photo session? Lots of string cheese — dogs love it, and the wrapper crinkles, which gets their attention — and plenty of patience,” Coleman says. “I’ve been known to crawl on the floor to help Teresa get the right shot.”

Two pups currently up for adoption, Avery and Cassidy, are getting ready for their close-ups. Time will tell whether they are more pearl or posy girls. Until then, check out our slideshow of eight Dachshunds who vogued for Berg’s camera and then used their Hollywood-style headshots to land new homes. 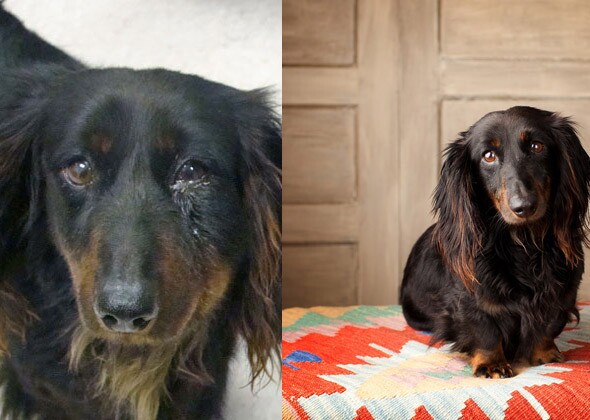 Morrie is a 6-year-old, black and tan standard longhair Dachshund who was found abandoned on a rural road. Today he lives with an older woman who adores his affectionate ways. 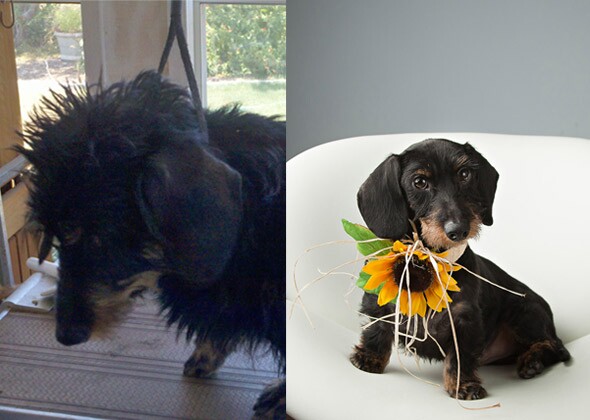 Finnegan — a 3-year-old, black and tan wirehair Dachshund — was impounded numerous times at a small-town shelter, until his owners refused to take him back. He was adopted by a woman who’s now prepping him to compete in agility events. 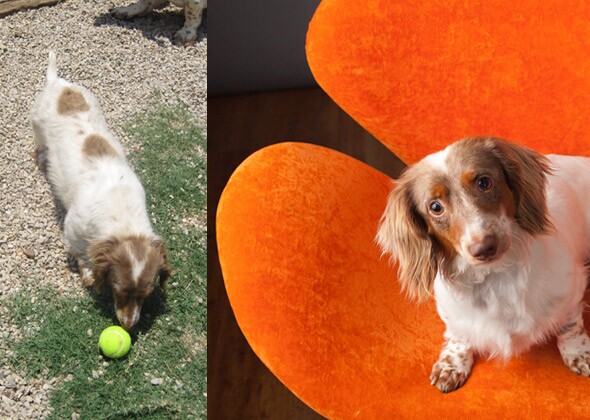 Franklin is a 3-year-old, red and white piebald longhair Dachshund who went from a shelter to his “perfect fit” home, where he lives with two other Dachshunds. 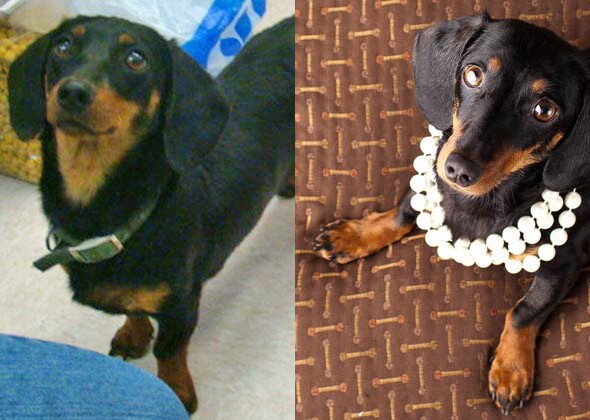 Kendall — a 1-year-old, black and tan smooth hair Dachshund — was found wandering the streets as a stray. A couple with another 1-year-old Dachshund adopted the energetic, pearl-wearing pup. 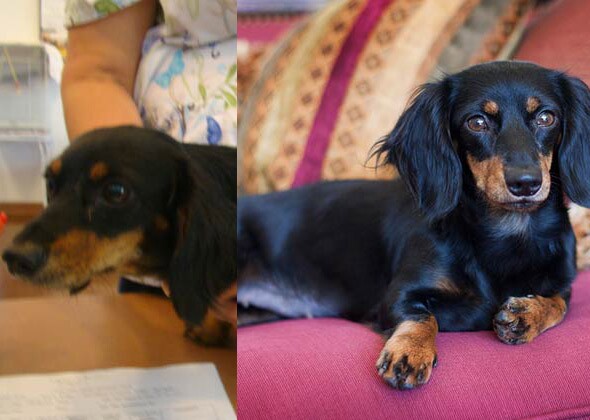 Marlie is a 2-year-old, black and tan longhair Dachshund who now shares a home with two loving humans and two other Dachshunds, one of whom also came from the Dallas-Fort Worth Dachshund Rescue. 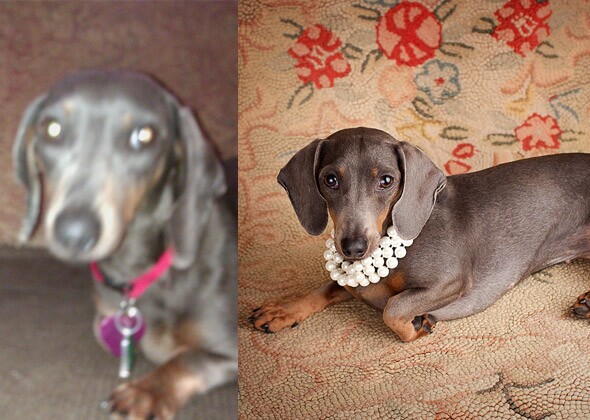 Jazzi — a 1-year-old, Isabella (gray) smooth hair Dachshund — passed through four homes in less than a year before she was adopted by a couple who was smitten with her Cleopatra-like pose. She also has a new buddy: a Basset Hound who lives with her. 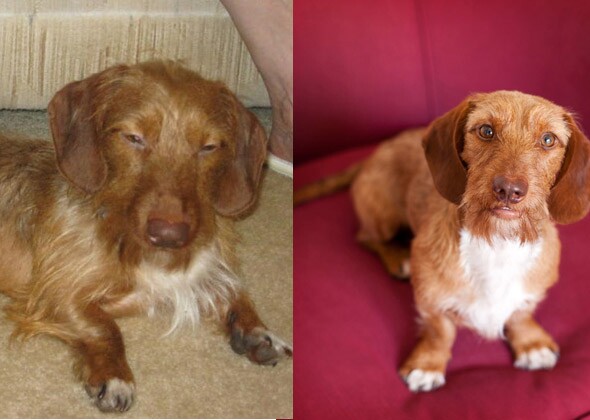 Austin is a 3-year-old, red wirehair Dachshund who was found wandering the streets with a serious flea infestation. He was adopted by a veteran member of the Dallas-Fort Worth Dachshund Club, who is working with Austin to get his therapy certification. 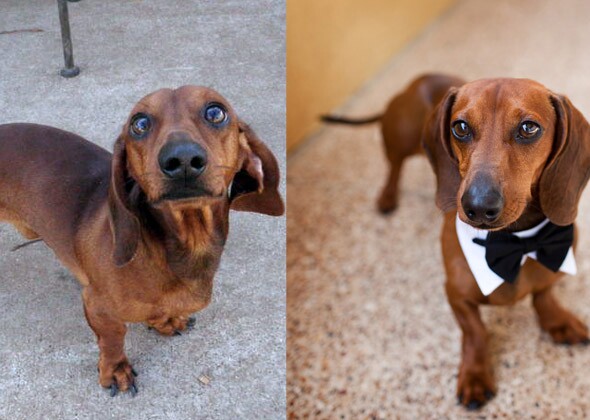 Cameron — a 2-year-old, red smooth hair Dachshund — was dumped at a shelter because his owner “didn't want to bother with him anymore.” Tux tie in place, he was photographed — and then adopted by Dachshund lovers whose previous pup died from old age. When his new owners met Cameron, they just "clicked”!

More Featured Articles › Adopting Instead of Buying a Pet

Your Guide to Dogs